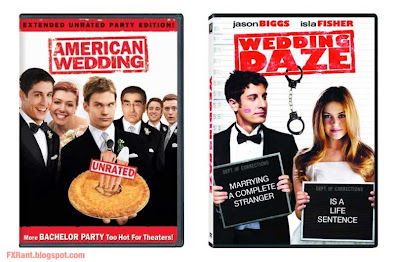 The "Wedding Daze" DVD cover certainly, ahem, borrows a few visual elements from the branding of the "American Pie" series, don't you think? And the ad campaign (including its television commercials) seems especially intent on ripping off the visual style, tone, and title-osity of "Pie's" third film, "American Wedding." The only thing missing from the cover is a tagline like, "If you liked 'American Pie,' you'll love "Wedding Daze!'" And that would be a tad awkward, because the films were created by different studios.

Jason Biggs prominently featured on the cover? Check. Actors, in tuxedos, isolated from their backgrounds and placed against a white backdrop? Check. Big, boldy, red title, with white specks to dirty it up, and a freakin' rectangle around the title? Check. Slight counter-clockwise tilt of the title graphic? Check. A redhead actress on the cover? Check. "Wedding" in the title? Check.

"Wedding Daze," an MGM film directed by Michael Ian Black, is actually a complete rebranding of the film originally titled "The Pleasure of Your Company," which apparently was completed in 2006. MGM, it seems, sent the project directly to DVD and retitled the movie. I'm sure the marketing folks at Universal are thrilled about "Daze's" marketing campaign.
Posted by Todd at 1/30/2008 08:21:00 AM

Hi !.
You re, I guess , probably curious to know how one can reach 2000 per day of income .
There is no initial capital needed You may begin to get income with as small sum of money as 20-100 dollars.

AimTrust is what you need
AimTrust incorporates an offshore structure with advanced asset management technologies in production and delivery of pipes for oil and gas.

It is based in Panama with offices around the world.
Do you want to become an affluent person?
That`s your choice That`s what you desire!

I feel good, I began to get real money with the help of this company,
and I invite you to do the same. It`s all about how to select a proper partner utilizes your funds in a right way - that`s the AimTrust!.
I earn US$2,000 per day, and my first investment was 500 dollars only!
It`s easy to get involved , just click this link http://butunapoh.freecities.com/aqujys.html
and lucky you`re! Let`s take our chance together to feel the smell of real money