Breaking Down a Visual Effects Shot from "Inferno" 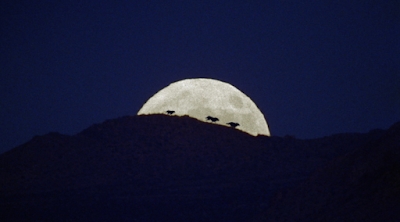 This movie (aka "Desert Heat") is objectively bad and should not be viewed by humans. The production shot this great footage of the moon rising with a super-long lens, and wanted to add some coyotes (a mom, dad and pup) running along the ridge as the last shot of the film. The production also shot some footage of a coyote running in the desert and wondered if we could somehow use this footage for the shot. It was a really fun little project.

I rotoscoped the coyote (traced its shape) for all of the frames that I had available, to isolate it. In addition, I stabilized the footage (smoothing out the camera operation) to help me lock the coyote in screen space, as if it was running on a treadmill, removing all the little bits of random motion from both the camera and the coyote's velocity changes.

Using my mattes and the stabilized footage, I created a run cycle for the coyote that was infinitely loopable. I threw the coyote over the footage and made position path that matched the ridge with as few keyframes as possible. All of this is in After Effects, btw.

I used the Auto-Orient to Path feature in After Effects, which meant zero rotation keyframes. I duplicated my coyote animation it to create the 2nd, messed with its path a little bit (to break it up) and offset the run cycle so they wouldn't be in perfect sync. For the pup I scaled it down and sped up its run cycle a little bit, to make it seem like its little legs had to work harder to keep up. I messed with its path, too, so that it caught up... then fell behind... then caught up again, giving the pup a little character.

Finally, I didn't want to try color correcting the coyotes to fit in the scene, so I used the coyote shapes and filled it with the landscape from the moonrise photography (moved up in Y), and mixed it with only a tiny percentage of the actual coyote footage.

It was a fun shot to put together, and I did pretty much everything (tracking/stabilization/animation/comp) in After Effects. I probably did the rotoscoping in Commotion.