Some Brief Thoughts on "Spider-Man: Into the Spider-Verse" 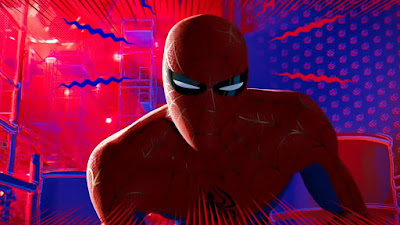 A series of tweets, over a series of days, bloggified here for posterity, about the wonderful "Spider-Man: Into the Spider-Verse" (2018).

"Spider-Man: Into the Spider-Verse" is for real. It is amazing. See it on the biggest screen you can. Crazy congratulations to Bob Persichetti, Peter Ramsey, Rodney Rothman and everyone that worked on this monumental movie.

I hope Persichetti, Ramsey and Rothman are prepping a short intro video for the home release of "Spider-Verse" asking viewers to turn off motion smoothing. I can only imagine how the "feature" will affect the film.

I’m taking a quick break from filming to tell you the best way to watch Mission: Impossible Fallout (or any movie you love) at home. pic.twitter.com/oW2eTm1IUA
— Tom Cruise (@TomCruise) December 4, 2018


There isn’t a lazy shot in this entire movie. Okay, I seriously cannot remember the last time I saw a new movie three times in two weeks. “Spider-Verse” is a masterpiece.

A quick examination of a single shot from "Spider-Verse" follows.

Things to notice in this one shot:
• Both Miles and Peter are animated on 2's (12 poses/sec), while the scene was rendered on 1's (24 frames/sec). So even though they're frozen for two frames, they are moving within the frame.
• They are on animated 2's, but offset from each other.
• Bagel!!!
• Scenes in the film were not rendered with traditional motion blur--nothing within the frame is smeared (just like comics). To simulate smoother motion in this shot, pieces of echoey geometry appear trailing Peter's screen left arm on certain frames, filling in "gaps".

A closer, slower look. Check out Miles' hand as he releases the bagel, for another way artists simulated motion blur without rendering motion blur.

A fun thing to look for in "Spider-Verse" are moments where a character shifts from 2's to 1's within a single shot. For extra credit: look for shots where parts of a character's body are animated on 2's and other parts of the body are on 1's!

The “Bagel!!!” shot discussed in this thread was animated by Andrew Perez at Sony Pictures Imageworks. Lighting by Kathy Chi and compositing by Jeremy Kin.

Labels: spider-man into the spider-verse

Can you review the animation for Love Death + Robots "The witness"? It's blowing my mind. It's on Netflix.