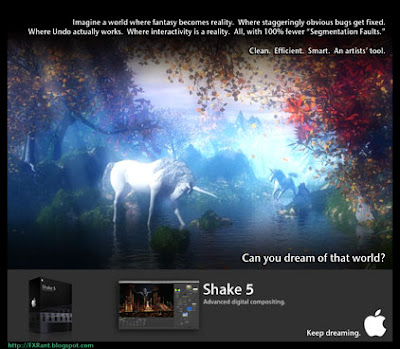 The finest sound designs for features contain a delicate balance between silence and volume. You'll find the most pleasing, interesting and dynamic sound designs are not from films whose soundtrack relentlessly pounds its audience into submission. Garbled, intrusive and assaulting, these films tire audiences, distracting them from a story (or lack thereof). 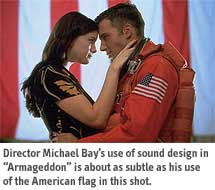 I can vividly remember the experience of seeing "Armageddon" (1998) in a theater... and I'd prefer to forget it. The final three reels of that film contain a nonstop onslaught of volume - an uncompromising crowded sonic landscape of screams, shouts, gunfire, an overwhelming Trevor Rabin score, and comet-related sound effects. The sound design of "Armageddon" is one of many reasons why this film is nearly unwatchable.

In color, you can enhance the perception of saturation by juxtaposing colors, as you can with shapes and size. (There are literally hundreds of books on this issue, but my current favorite book on this topic is Vision and Art: The Biology of Seeing). What many filmmakers forget is that the same is true for sound. One way to make sure a soundscape is not muddled and overwhelming is to simplify the mix. This is especially difficult for modern action pictures which, by their very nature, are over the top and outrageous. And most of these directors know one sound cue: "loud." 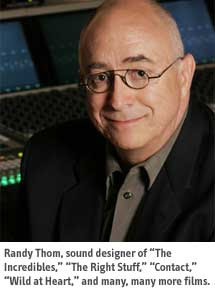 (If you're interested in an interesting and unique film soundtrack, watch David Lynch's "Wild At Heart" (1990), containing sound design by Randy Thom. The sound effects over the ultra-slow motion macro photography of matches being lit are extraordinary.)

Here is one example of a technique that helps create a sonic exclamation point. Ironically, it has everything to do with silence.

Presented are two clips, one from the climax of a chase sequence from "Mr. and Mrs. Smith" (2005), and another from "Mission: Impossible III" (2006), which features Ethan Hunt parachuting between skyscrapers of Shanghai. I've split the screen to feature a visual representation of the sound waveform and its spectrum (lows to highs), to help illustrate my point.

Watch the clips, then rewatch them again, keeping an eye on the waveforms.

Firstly, notice how clean these mixes are, especially considering the visual chaos that happens alongside the soundscape. Secondly, the precise and deliberate use of momentary silence in these clips is profoundly relevant to the emotional impact of the scenes.

The "Mr. and Mrs. Smith" Clip
The climax of this exciting action scene features a sound design that is truly unique. The sequence presented is the denouement of one of the film's action setpieces, and clearly, the soundscape for this little bit of action was carefully crafted to hurl an emotional punch. Each phase of the action has a distinct cadence and rhythm, and the individual moments are clearly defined and crisp. Listen to the sound mix again, this time with your eyes closed.

The soundscape has a deliberate pace. A few things stand out; for one, the sound of Jane Smith's (Angelina Jolie) gun is not cliche and is unique. The effect is not the same one we've heard hundreds of times before; it's distinctive. The 'bang' is relatively muted, perhaps specially recorded and designed specifically for this film. Considering the large variety of weapons used in the film, and the relatively large budget of the film itself, an effort could have been placed on creating a new library of gun sound effects.

Each bullet's impact against the cars is clearly heard, with very little rumbling underneath the staccato piercings, which make them stand out even more. The same is true for a wide shot of a tire that bounces off the roadway near the camera; this exaggerated sound effect (resembling the sound of something more bouncey, like a dodge ball) is not competing with underlying sound, so its impact is guaranteed to be felt.

However, the aspect of the sequence that intrigues me the most is the sound design for the shot from inside the minivan. At that moment, almost all of the sound is muted, almost to a point that would be (gasp!) realistic in nature. Notice what happens when we cut to the shot inside the minivan -- for just a beat, the sonic world takes a breath. You can clearly see this with the visual waveform. Instead of a steady onslaught of intense aural information, the audience is allowed to 'reset' for a moment. This brilliant technique makes the next few shots that much more powerful. 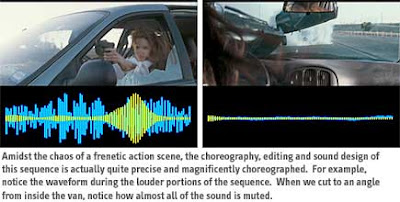 A nice touch is the prominent and clearly audible sound of the minivan's transmission. The distinctive sound of a car speeding in reverse is amped up and featured, without being muddled by distracting peripheral noise.

In regards to music, notice how the musical score crescendos just before Jane's heroic moments, then remains completely silent throughout the duration of the action. When we return to a two shot of our heroes, the music cuts back to the diegetic sound of the car radio, tinninly playing a cheesy Air Supply love song. The tune actually mirrors how the scene began - with John Smith (Brad Pitt) singing along with the track.

In addition, this little sequence brilliantly illustrates how a film editor can extend the real-time duration of an event to triple or quadruple its original length. Notice how the complicated stunt, which occurs in a fraction of a second in real-time, takes place over several seconds in the final edited sequence.

Props go out to Cameron Frankley, "Mr. and Mrs. Smith"'s sound supervisor for the film, and his team.

With all of the action in this scene, it could be quite tempting to layer the Michael Giacchino score over all of the gunfire, breaking glass, and parachute sound effects. However, notice what director J.J. Abrams does just before Ethan Hunt (Tom Cruise) breaks through the window.

After a series of cuts from outside the building, building to a nice crescendo of music and sound effects, we cut to a shot inside the building. For a split second, all sound has been muted. Then, after barely a beat, Ethan blasts through the glass. In the theatre, this little sequence had an amazing impact, and it is that brief moment of silence that makes the CRASH of the impact that much more impressive. The silence allows the CRASH to be a sonic exclamation point. Without that brief pause in the soundscape, the emotional punch of the scene would have to be supported by the visuals alone - with the soundtrack providing only a numbing chorus of volume.

Sound designers are the unsung heroes of modern action films. When a director with actual talent works closely with experienced sound designers and film editors, a soundtrack can be created that precisely complements all of the hard work of the stunt coordinators, special effects crews, and visual effects teams.