It wasn't easy to find coverage of the VES Awards from the Visual Effects Society itself. If you go to VESAwards.com, there is no information on the winners listed (only applications and nominees). No email went out to VES members, which is strange because VES is usually pretty good about disseminating information via email. I went to visualeffectssociety.com, and on the far right side is a tiny link to a hastily prepped PDF file, which contained the names of the winners. The site contained no photographs of the event, no video, no acceptance speeches, and no links to other press coverage of the event. Disappointing, to say the least, especially for VES' biggest night of the year.

One of the many elaborate matte paintings for Clint Eastwood's "Changeling"
As for the awards themselves, I heard that it was a fun show. They gave lifetime achievement awards to the one and only Phil Tippett, as well as the monster producing partners Kathleen Kennedy and Frank Marshall.

As for the awards themselves, I was, of course, rooting for my fellow ILMers for our nominations for "Iron Man" and "Indiana Jones." I especially was hoping for an "Indiana Jones" win for Best Created Environment, since I contributed to the Temple Heart sequence (hopefully more on this in a future post). But "Button" and "Dark Knight" swooped up most of the awards, and for the most part, rightfully so. 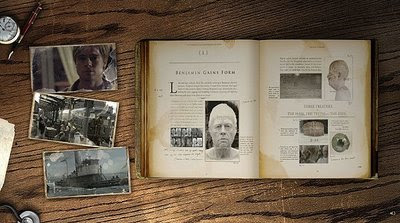 An image from "The Science Behind Benjamin Button"

If you haven't seen it yet, make sure you visit the well-made The Science Behind Benjamin Button, which nicely highlights some of the visual effects challenges from the film.

Here are some press clippings that I was able to muster:
And here are all of the winners of the live-action feature film categories. (To see all the nominees, click here.)

"Button" Buttons Up The Oscar

Hearty congratulations go out to the visual effects teams behind "The Curious Case of Benjamin Button," which won the Oscar for Best Visual Effects at the 81st Academy Awards. Here's Eric Barba's acceptance speech:

Oh my God. On behalf of myself, Steve Preeg, Burt Dalton and Craig Barron, I'd like to thank the Academy for this incredible honor. I'd also like to thank Edson Williams and his team at Lola Visual Effects and Nathan McGuinness and his team at Asylum as well as all the other visual effects teams that worked so hard on this film. I'd like to thank our amazing team at Digital Domain, my mentor Ed Ulbrich, my wonderful producer Lisa Beroud, the woman who is my biggest supporter, my wife Roma, Kathleen Kennedy, Frank Marshall and Ceán Chaffin, for trusting that we could actually pull this off. Brad Pitt for an amazing performance. And of course David Fincher for giving us all the opportunity to work on this film. To my kids, Cole and Nicolette, I'd just like to say, "Work hard, do good work and never give up." Thank you.

This was a rare year in which all three nominees were worthy of Oscar, in my opinion. And it was extra special to see my friend Craig Barron holding that statuette on the stage of the Kodak Theater. Way to go, Craig!

I even updated the Academy Awards section of Visual Effects Headquarters. How about that?

Update: Here is the backstage Thank-You cam, where Steve Preeg, Burt Dalton and Craig Barron were allowed to make their thank-you's.

...and there are the four winners, answering questions from the press backstage.

Not only did a new commercial for "Star Trek" appear during the Superbowl last week, but the very first images from "Transformers: Revenge of the Fallen" landed on television screens. Head over to Apple's Quicktime page to view the new commercial in HD.

These four still frames were chosen by the Randomizer 2009™ software, featuring ArbitraryBoost 3.0.

So, a little movie called "Star Trek" debuted a new commercial during the Superbowl last week. Make sure you watch the commercial (in sweet, sweet high definition). In the meantime, here's a frame from the commercial, chosen by the Randomizer 2009™ software, featuring ArbitraryBoost 3.0.
Posted by Todd at 2/07/2009 03:30:00 PM 2 comments: