When it comes to issues regarding proper aspect ratio projection of movies and television shows, I am a bit of a stickler. Just ask anyone who witnessed my Twitter tirades over “The Simpsons” being broadcast on FXX in the incorrect aspect ratio.

I recently rented Jon Favreau’s terrific film “Chef” on my Apple TV and was surprised to see the film presented in the wrong aspect ratio (the left side of the image was missing), and the 2.35 anamorphic film top justified (instead of center justified). So I’m documenting it here, to help Apple engineers figure out the problem, and to help make sure it doesn’t happen on future titles. I also filed a bug report, and submitted the issue to Apple’s support boards.

On 10/10/2014, I rented the HD version of “Chef” (2014) on my Apple TV. The widescreen film was presented in the wrong aspect ratio (the left side of the image is cut off), and also was top justified (leaving a black band at the bottom of the screen, instead of black bands at the top and bottom of the image).

After seeing the image like this, I restarted the AppleTV and tried again, and the image was still incorrect. My television settings were correct (I am a digital film professional); my Apple TV model is MD199LL/A, and we are using Apple TV Software 7.0 (6897.5); 1080p HD - 60Hz. 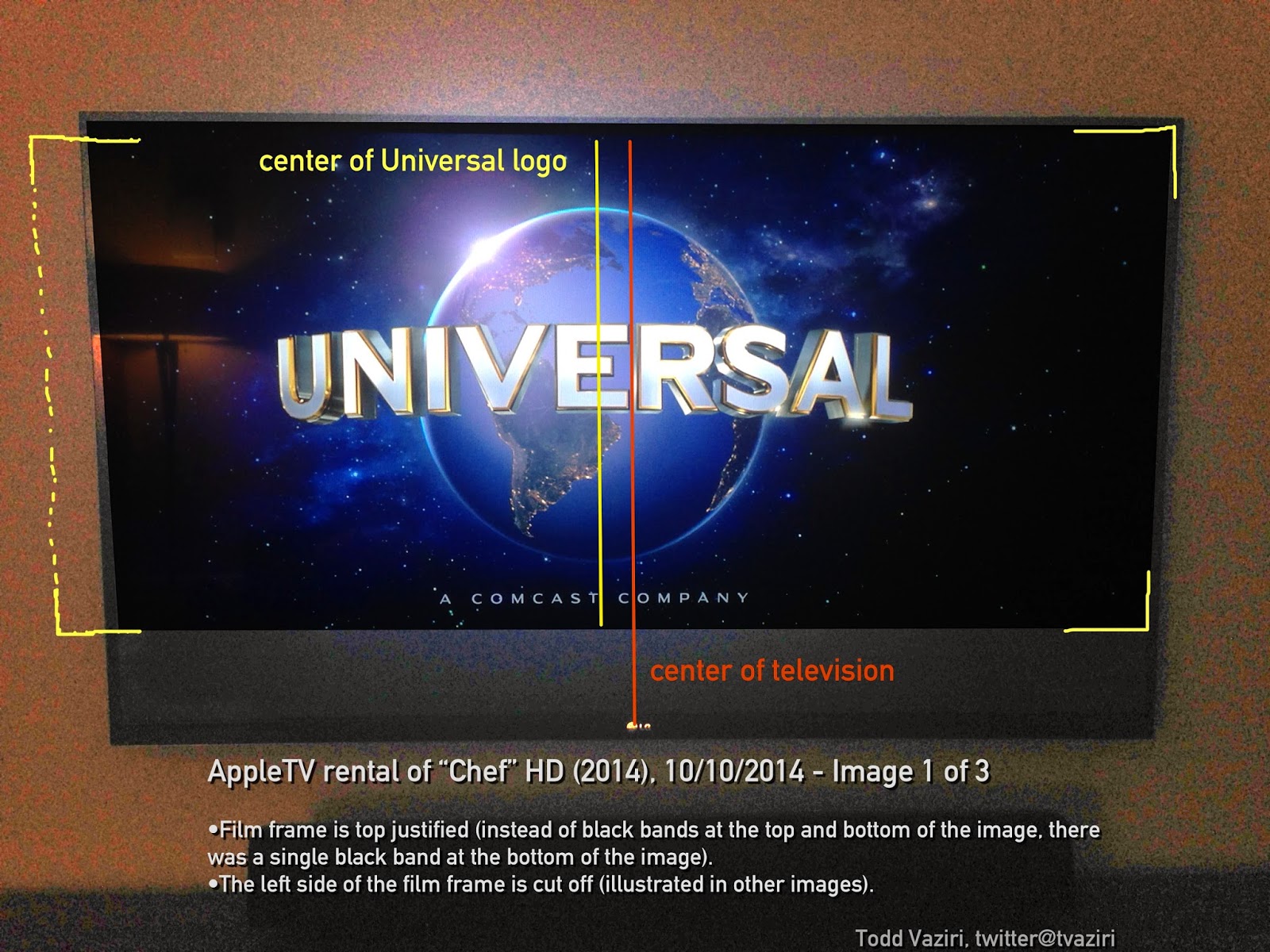 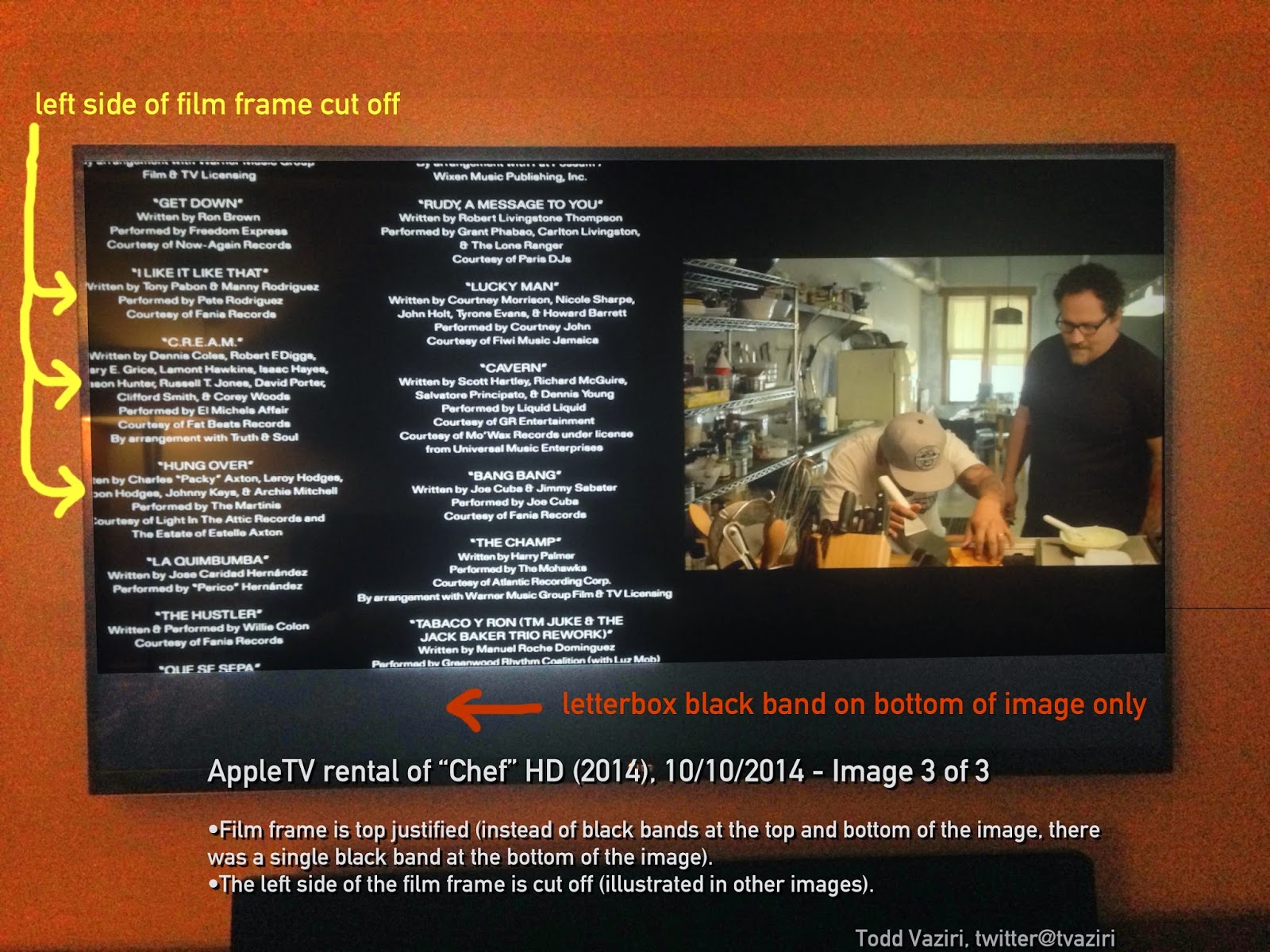 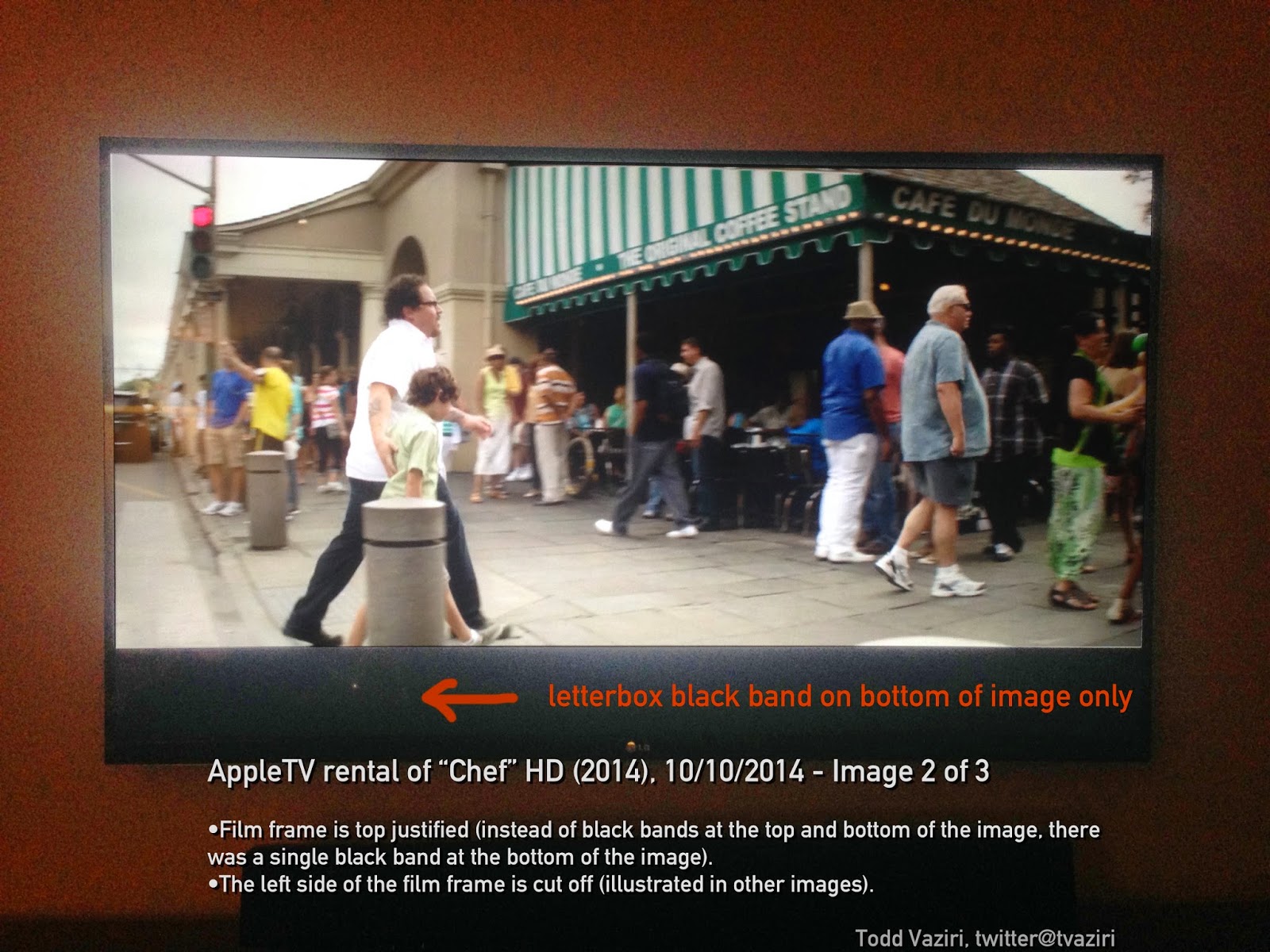 I got a response from Apple.

To inform Apple about the issue, I used the "Report a Problem" link that appears in all e-mail receipts from Apple TV/iTunes purchases. (Use it, folks, if you ever see anomalies like this.) I received a personalized response within 24 hours along with a refund. After a brief exchange, the Apple representative, with a complete understanding of the issue, kindly let me know that, from Apple's perspective, this appears to be an issue with the source material as provided by the content provider to Apple. As I suspected, the incorrect crop and justification of the image has been authored into the 16:9 source that Universal/Open Road Films has provided to Apple. If true, there's nothing Apple can do to resolve the issue. Universal must provide a new, correctly formatted version of the film to Apple.

Kudos to Apple for responding so quickly, as well as so personally. The support person I traded emails clearly understood my passion on this issue and, for that, we cinephiles are grateful.

Jon Favreau, Open Road Films and Universal - please look into this. Your terrific film is being seen the wrong way by everyone who rents (and, I'm guessing, purchases) this film from Apple's iTunes and Apple TV, and you guys can fix this by providing Apple a new, correct source file. More people are noticing the problem, too.

Many distinguished Hollywood directors have embraced the Futura font over the years, most notably Stanley Kubrick, J.J. Abrams (here and here) and Wes Anderson. In fact, Futura has the honor of being the first typeface to appear on the moon.