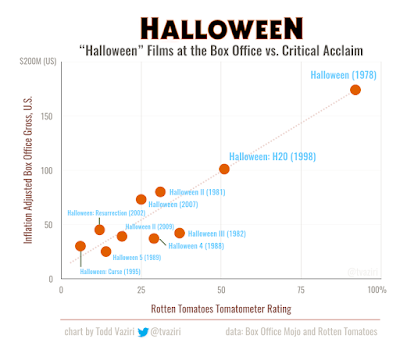 If you follow me on Twitter, you'll know that I sometimes tweet Box Office statistics, specifically charts that show franchise films, or films from a specific director or actor, inflation-adjusted and ranked.

Comparing the inflation-adjusted box office earnings films within a franchise is the closest we can get to an apples-to-apples comparison between multiple films, which is why I'm fascinated with these charts from Box Office Mojo.

The forever optimist in me, who strongly believes that Hollywood blockbusters are not fated to be awful pieces of garbage, still believes there is a correlation between making "good", critically-acclaimed movies that ultimately earn a lot of money at the box office. My go-to metric for this is the Rotten Tomatoes Tomatometer, which aggregates film critics' recommendations.

I will start charting franchises, directors and actors, cross-referencing their inflation-adjusted box office earnings from time to time. I started with the "Halloween" series, debuting in 1978, which spawned nine sequels and reboots. 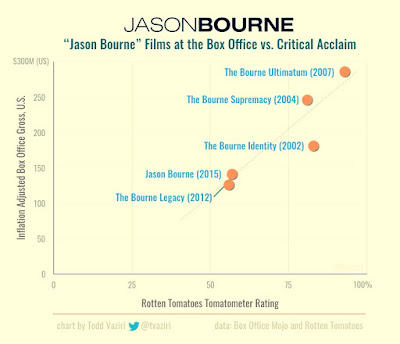