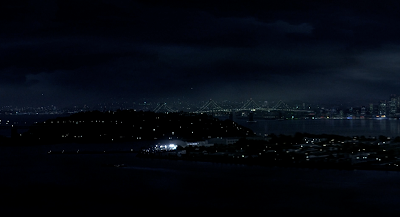 Interpreting a Performance Through The Years

1977 interpretation of this micro-moment: Obi-Wan is emotionally preparing himself to tell a boy how his father was murdered.

1983 interpretation of this micro-moment: Obi-Wan is emotionally preparing to obfuscate the truth about a boy's father's turn to evil.

2005 interpretation of this micro-moment: Obi-Wan, remembering how he left the boy's father for dead, readies himself to obfuscate the past.

(a potential reality: Marcia/Hirsch/Chew/George chose a take with AG hesitating. AG hesitated because he momentarily forgot his line.) 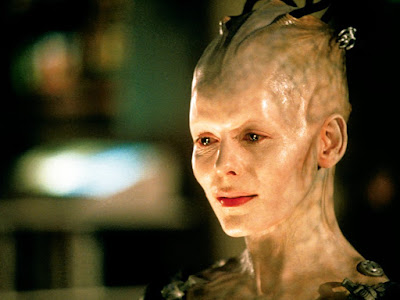 If I were in charge of the universe, I’d create a Visual Effects Hall of Fame, an inductee would be this shot from "Star Trek: First Contact" (1996), directed by Jonathan Frakes. In a movie filled with spectacle, it's a quiet, jaw-dropping moment.

The introduction of the Borg Queen (Alice Krige) shows off the hybrid robot/humanoid nature of the Borg, with her seemingly humanoid head and shoulders (delivering dialogue!) being lowered and attached to a robotic body.

The first part of the shot is a challenge unto itself: a severed human torso being lowered by cables onto a body. The extra added challenge is that the body needs to be assembled and walk toward camera in an uninterrupted shot.

Alice Krige was photographed while mounted onto a motion control crane in makeup and appliances. The rest of her body is angled backwards, plainly visible to camera. Her head and shoulders, blending with the makeup effects, sells the effect. You don't notice her real-life head tilt. Krige's first performance was shot with a motion control camera sync'd with the crane (so the camera move and Krige's arc can be replicated precisely take after take). Later, Krige in full head-to-toe makeup and costume acted out the 2nd half of the shot, walking toward Data, also mo-con.

The massive shot required assembling two different pieces of performance (Krige on crane/Krige walks toward Data), blended with morphs and secondary animation (check out the hooks that pull the skin on her chest into place). Also the massive paintout of the camera and Krige's body.

And there's nowhere to hide the transitions. No lightning flashes, no smoke, no camera shake, no characters walking in front of camera (to hide a transition). It's all right there, in front of you.

Up to this point in film history, the accumulated cinematic vocabulary of a shot like this instructed audiences to expect a cut just as she's lowered into her body, since a shot like this had never really been done before. NO CUT. Then she walks toward camera. Awesome. 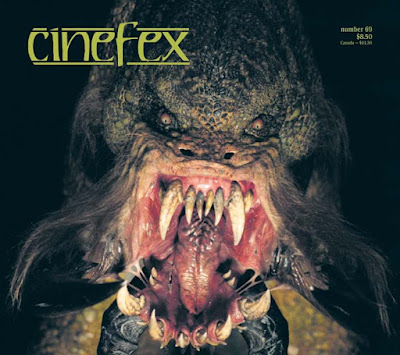 Here's John and Alex talking about the shot in an 11-minute featurette.

A Shot from "True Lies": Visual Effects Hall of Fame

If I were in charge, I’d create a Visual Effects Hall of Fame, an early inductee would be this shot from “True Lies” (1994). The denouement of an enormous, spectacle-filled action scene is deceptively simple—a classic ‘you think you know what you’re seeing but you don’t.’

In context: we’ve just been through an outrageous action sequence involving a Harrier jet, a crane at the top of a skyscraper and missiles. Lots of quick cutting, action and chaos. After all the havoc, a 19 second long shot of our heroes landing on the ground is a welcome relief.

The shot design: a fancy fighter jet is landing with the camera at a safe distance, slowly dollying forward. The camera move is modest. There’s nothing obvious to subconsciously telegraph to the audience that there are any camera tricks or visual effects used in the shot.

The shot continues: the heat ripple and flying debris feel natural and not over the top. The police car in the foreground physically shields us from the jet, giving us a slight sense of security, even when the jet bumps into it. Again, the camera is being conservative… until the jet lands. The audience is fully expecting a cut to a closeup of Schwarzenegger emerging from the cockpit (rather than revealing the real pilot), but it doesn’t cut. The camera moves closer to reveal Schwarzenegger was in the cockpit the whole time.

Arnold sat in the cockpit of a 7,000 lb fake Harrier jet constructed by the production, which was lowered via a single cable attached to a crane. That’s really Schwarzenegger and Eliza Dushku in the shot. The bump of the police car adds fantastic verisimilitude. 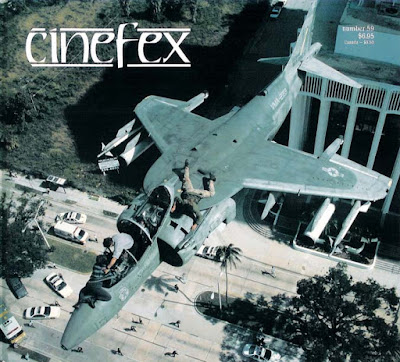 The wire was erased digitally, and the spinning turbines are *not* CG, but are tracked footage of a real Harrier intake. If you’re interested in the SFX & VFX of “True Lies”, you’ve got to buy Cinefex 59 or just buy it for the Cinefex iPad Edition. 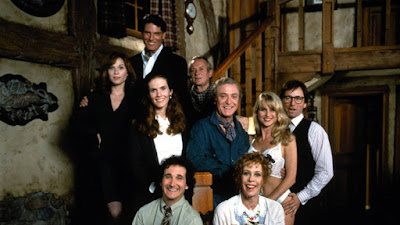 As a rabid admirer of “Noises Off...”, the irreverent 1992 film adaptation of the hit stage play, I always wondered how precisely the first act of the film (which depicts the first act rehearsal of a play) would synchronize with the second act of the film (which depicts a performance of that first act, but from the backstage perspective). So I did my best to synchronize the two sections of the film, so here it is: a single 19 and a half minute take of act one of 'Nothing On.'


The stage play of “Noises Off...” is performed first with the ‘Nothing On’ (the play-within-the-play) set facing the audience, and then with the set spun 180 degrees so the audience can see all of the backstage antics. Film director Peter Bogdanovich took the same approach with the movie, with the camera largely remaining on the ‘audience’ side of the set during act one of the movie. For act two of the film, the camera largely remained backstage, with only occasional audience-perspective cutaways.

My approach for my synchronization edit was fairly straightforward. My first task was to create an uninterrupted “take” of the dress rehearsal performance, photographed from the audience view. This meant editing out all of the interruptions from act one of the film, mostly consisting of the director Lloyd Fellows (Michael Caine) bellowing to his actors about sardines continuity, providing motivation for his actors, and looking for Brooke’s lost contact lens.

Once that uninterrupted performance was edited together, I took the backstage-perspective (act two of the film) and cut it so it would be in sync with that audience-perspective performance. This proved to be the bigger challenge, since the backstage antics revolve around the characters’ mischief that nearly sabotages the play many times.

For the backstage edit, I did a few retimes (both speedups and slowdowns) and did my best to synchronize the lines of dialogue. Remarkably, the backstage portion of the film is fairly true to the rehearsal, with a few large gaps where moments of the script were simply not represented. For these giant gaps, I decided to fill the backstage edit with “clean” shots - backstage shots without any characters in frame. I got away with a few choice still frames, but had to create three “clean” plates, painting out John Ritter, Marilu Henner and Carol Burnett out of three different shots. I didn’t want to over use the backstage security guard reactions, gloriously portrayed by J. Christopher Sullivan, since it would quickly appear repetitive.

As the second act rolls on, the backstabbing and sabotage becomes much more disruptive to the performance of “Nothing On”, which was hard to obscure in the edit. Near the end of the edit, I had no choice but to show the massive discontinuities between the near-perfect rehearsal and the mayhem of the performance. I kept the main timing of the major beats (entrances, exits, sound cues) intact, however, as much as I could. 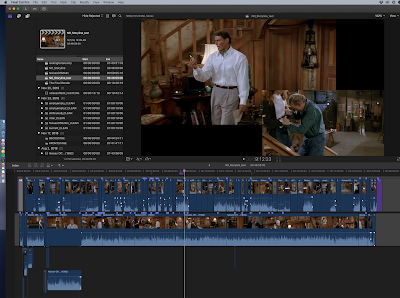 My editing process was quite straightforward. The play within the movie is a farce which luckily contains several slamming doors—the perfect synchronization device. After I edited the dress rehearsal footage into an uninterrupted version of the play, I grabbed the backstage footage and started synching door slams. Once I bracketed a section of footage, bookended by door slams, I looked at the clip and gently retimed or edited the chunk so that the lines of dialogue overlapped. Frequently I’d have a version of the “backstage” dialogue at a low gain, so you can hear a bit of an echo. I ended up with around 140 cuts.

The film (and the play on which it’s based) is remarkable at how it weaves the lines and actions of ’Nothing On’ with the back. I particularly love the synchronized backstage and in-play “Oh my God!” outburst from Christopher Reeve.

Another nice moment is John Ritter’s in-play line “He’s searching for something!” which synchronizes nicely with Michael Caine searching Denholm Elliot for the missing bottle of booze.

Editing all of this "Noises Off..." footage together gave me even more respect for the technical craftmanship of the screenplay, choreography and performances of the film. Not nearly enough platitudes can be given to Ritter, Henner, Burnett, Caine, Elliott, Julie Hagerty, Mark Linn-Baker, Reeve and Nicollette Sheridan for their remarkable, distinctive performances and dedication to these highly technical roles. 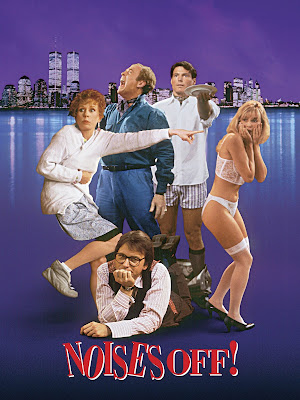