(Don't talk to me about The Predictinator right now.)

Over at The Academy's Facebook page, the fine folks behind the Oscars have been creating posters for various nominees.

Here is a GIF of the five nominee posters for Best Visual Effects.

Most likely, the person in the blue bear costume was stuntman Glen Ennis, who "played" the bear during live-action shooting. The bear, as you may know, was ultimately realized entirely with computer graphics by Industrial Light & Magic. 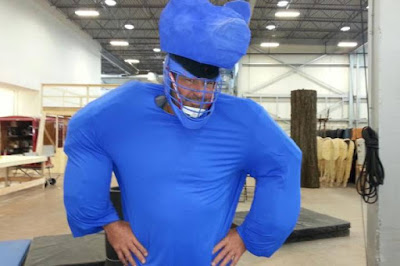 An excerpt from the Ennis interview from Global News:

How does it feel to be involved in a movie that just won Best Picture at the Golden Globes, and is nominated for a Best Picture Oscar?


It feels cool. I’ve been in a lot of movies and had parts that I thought were going to be substantial; sometimes they are, sometimes they’re not. When I was doing it, I had no idea that the bear scene was going to be such an integral part of it. It was hard, sweaty work for me. And now that it’s turned into what it’s turned into, I’m incredibly proud of the work. I’m a small part — obviously the geniuses who made it look as good as they did with the CGI deserve credit — but it’s still pretty cool to be a part of it.

At first glance, one might suspect the reason for the poster change could be part of director Alejandro Innaritu's intention to keep the movie magic behind the visual effects of the bear a secret. I wrote extensively about this in my Predictinator article (jump to "Potential Spoilers"), and have also tweeted about it. Upon further reflection, however, it appears as though the 'blue bear' image was added by mistake, since every single image in each of the posters is a final visual effects shot. No other original photography, wireframes, or any other "before" photo appears. The newer "Revenant" poster merely fixes that mistake.

@tvaziri not all of the images on the academy VFX posters are finals - Ex Machina contains concept art.
— Gavin Graham (@gavgraham) February 24, 2016

Visual Effects, Oscars and the Box Office in 2015

Just as I did for 2014 films, 2013 films, 2012 films and 2011 films, I thought it would be interesting to track the average global box office grosses from this year's Academy Award nominees, per category. 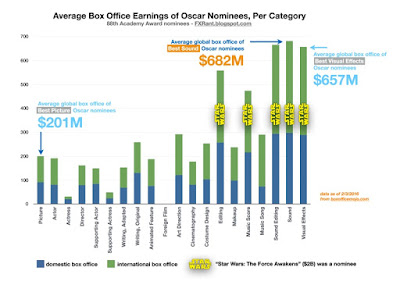 The five nominees for this year's visual effects earned a total global box office gross of about $3.3B. The monster earner was "Star Wars: The Force Awakens" at nearly $2B; rounding out the Visual Effects nominees were "The Martian" at $600M, "Mad Max: Fury Road" at $376M, "The Revenant" at $288M and "Ex Machina" at $36M.

The 2015 chart doesn't look like any of the other years' charts, since "The Force Awakens", a $2B earner, was nominated for five Oscars, which exploded the average earning for all five of those categories. In every other year, Visual Effects towers over all the other Oscar categories.

In fact, for the first time since I've been charting average box office earnings per Academy Awards categories, visual effects is not the top earning category. This year, Best Sound edged out visual effects with an average of $682M per nominee (as opposed to Visual Effects' $657M per nominee).

The last five years at a glance:


All data from boxofficemojo.com .

This way, in a tight race for the winner of the pool, the winner most likely would not be determined by the non-mainstream films (in other words, blind guesses).  This year, I started with a ballot from Fandango, since Oscar.com didn't make a pretty, printable ballot this year. Again.

Download the ballot here for the 88th Academy Awards and use it at your Oscar party. 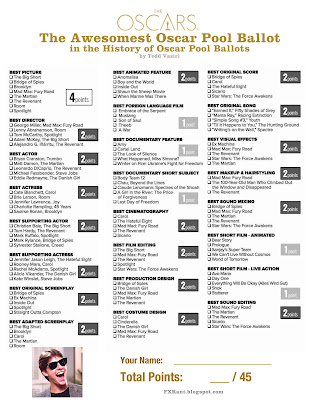 "The Force Awakens" Wins Big at the 14th VES Awards

On February 2, the winners of the 14th VES Awards were announced. The nominees were determined by VES members who participated in the nomination judging process.