The Long Take: "The Office" 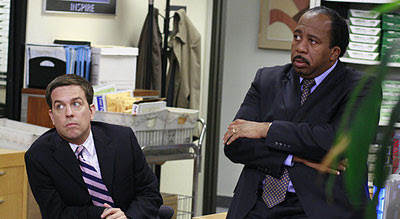 I'm such a sucker for the long take.

I find it thrilling to see several parts of a film production working together, seamlessly, to produce a single, long, uninterrupted piece of film. Not only to the actors have to be on their game (and not rely on cuts to 'cover' their performance), but every single other discipline on set has to be carefully choreographed and synchronized to make the shot work. These long takes are extremely time consuming to prep, and subsequent resets also eat up a lot of production time, so all departments really have to be on their game when shooting these uninterrupted cuts.

This long take from "The Office" (episode 'Dunder-Mifflin Infinity, Part Two') illustrates some amazing choreography between actors, special effects, cinematography and camera work. Not only is the clip funny, but it's actually suspenseful and exciting, too, especially because of the faux-documentary style of the show.

We'll have more coverage of long takes in film and television in the future. Hopefully.

Wrapping up our series, paying tribute to the photography of Douglas Slocombe for "Raiders of the Lost Ark." (Be sure to see Part 1, "Raiders:" Shadows and Silhouettes, Part 2, "Raiders:" Eyes, and Part 3, "Raiders:" Foregrounds and Backgrounds.)

Here is a sampling of just plain cool in-camera shots (no visual effects) from "Raiders."

"Raiders of the Lost Ark:" Foregrounds and Backgrounds

Continuing our series, paying tribute to the photography of Douglas Slocombe for "Raiders of the Lost Ark." (Be sure to see Part 1, "Raiders:" Shadows and Silhouettes, and Part 2, "Raiders:" Eyes.)

Here is a sampling of images from "Raiders," where Spielberg and Slocombe frame objects of varying depths in the frame. In these shots, the filmmakers are telling a story from multiple depths, as well as filling the screen from left to right.

Coming up next time: simply cool shots from "Raiders."