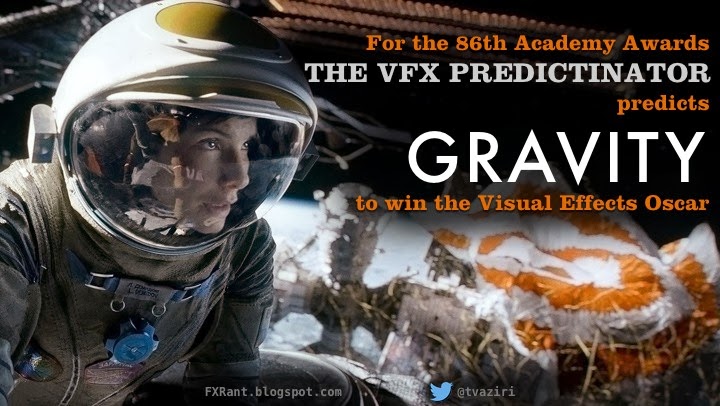 Now that the Academy Award nominations have been announced, it’s time to fire up The VFX Predictinator.  This year’s predicted winner may not surprise you. But first, here's some background for those of you just joining us.

The VFX Predictinator is a formula my wife and I created to predict the winner of the visual effects Oscar. We designed the formula before the 82nd Academy Awards based on 20 years of data (1989-2008); it assigns point values to certain criteria of each nominee. Part 1 of the series.

Allow me to reiterate that this discussion is not about artistic or technical achievements. This isn’t about who ‘deserves’ to win due to aesthetic achievement, technical prowess, or cultural significance; the whole point of this exercise is to prove that Academy voters are simply predictable when it comes to determining how they will vote. As a reminder, the visual effects branch of the Academy determines the nominees in a bake-off, while the full Academy membership of nearly 6,000 members votes on the winners.

Academy voters ride waves of popularity, acclaim, perceived challenges and their own short memory spans when voting for winners of Academy Awards. Many admit they haven't seen even a majority of nominated films. We designed The Predictinator to account for these things: for example, popularity (box office), acclaim (Rotten Tomatoes score), memory span (month of release), plus other criteria which can affect voters' emotional choices.

Is the nominee a sequel? Blech. Has its lead actor won an Oscar before? Oh, well, it’s got my vote! Is the movie filled with robots that destroy things? Meh, no thank you. I just saw this movie two months ago! I remember it!

Let’s see what the formula says about the 86th Academy Awards:

“Gravity” is the predicted winner, with 9.67 points. Its margin of victory is quite similar to last year’s winner, “Life of Pi” over its next closest competitor.

Alfonso Cuaron’s film excelled in nearly every piece of criteria; it was a critical darling (it had the highest RT score of all the nominees at a whopping 97%), earned a lot of money (the third top grosser), and was released late in the year. The film was one of two non-sequels nominated, which helped as well. Nominees that are sequels have their scores reduced by 0.5 points.

Putting the final nail in the coffin, “Gravity” stars Sandra Bullock, who is an Oscar winner herself, giving the film another point.

Last year, “Hobbit 1” had the third highest Predictinator score; this year “Hobbit 2” earned enough to be in second place. Strengths for “Hobbit 2” included its month of release (December) and its respectable Tomatometer and box office scores.  It was the only film that qualified for the extremely important “Primary FX are organic creatures” criteria, plus the subsequent “facial acting” criteria, for its creation of Smaug, the talking dragon. However, these positives weren't enough to overtake the juggernaut that is “Gravity”.

The relative lack of organic creatures in 2013 mimics 2011 and 2010; like those years, only one film had organic creatures as their primary visual effects. In both of those years, the creature film was not the predicted (nor actual) winner. If our 2013 prediction is true, it will continue this bizarre pattern.

At third and fourth place was “Star Trek Into Darkness” and “Iron Man 3”, two sequels that were well-reviewed and earned lots of money at the box office, but were penalized for being sequels, and without primary creature work. Plus, they were released earlier in the year, and didn’t earn enough additional Oscar nominations to earn any points.

“The Lone Ranger” earned a dismal score of 1.17 points; it was destroyed by its low Tomatometer rating and its relatively minuscule box office. But its low score was not record-breaking. At 1.04 points, “Transformers 3” has the lowest score of The Predictinator’s history. “Ranger” has the second lowest, with “Alien 3” as the third lowest.

Stepping away from the statistics for a moment; there’s no denying that “Gravity” has captured the imagination of the public and of Academy voters.  The innovative techniques used in the creation of the effects, along with its flawless execution and gorgeous aesthetics (combined with the fact that it is a nearly universally-loved film) give this prediction emotional support. The Predictinator numbers quantify the wave of popularity and acclaim for the film.

You might respond to this prediction with Um, well, duh, of course ‘Gravity’ will win the Oscar. I don’t need a formula to tell me that.

I would be the first to admit that it would be truly surprising if "Gravity" didn't take home the Oscar.  Lucky for us, The Predictinator seems just as accurate predicting the obvious winners as the nail-biters.  How many people were predicting “Hugo” to win over “Rise of the Planet of the Apes” and the final “Harry Potter” film?  Or "The Golden Compass" winning over "Transformers"? Or "Babe" over "Apollo 13"? The Predictinator nailed these winners, plus also correctly predicted the lopsided victories of “Avatar” and “Inception”.

We'll see what happens when the Academy Award winners are announced on March 2.  UPDATE: Yep.

The nominees for the 86th Academy Awards have been announced. As always, the nominees were determined by the visual effects branch of the Academy after attending a bake-off of 10 films.  The full Academy membership will vote on the winners of each category.  The awards ceremony will take place on March 2, 2014.

Here are the nominees for Achievement in Visual Effects for the 86th Academy Awards. Congratulations to all who helped bring these images to the screen.

And, yes, I will run The Predictinator on this year's group of nominees. Stay tuned.  And here it is.

The Visual Effects Society has announced the nominees for the 12th VES Awards. The nominees were determined by VES members who participated in the nomination judging process.

Alfonso Cuaron's "Gravity" earned the most nominations, totaling eight, including Best Visual Effects in a Visual Effects Driven Film.  "Pacific Rim" earned six noms, while "Iron Man 3" and "The Hobbit: The Desolation of Smaug" earned five each.  "Star Trek Into Darkness", "The Lone Ranger" and "Man of Steel" each earned two nominations.

Earning one nomination was "The Great Gatsby", "The Secret Life of Walter Mitty", "The Wolf of Wall Street", "White House Down", "Oz: The Great and Powerful" and "Elysium".

Some interesting tidbits from this year's nominees: films that are in this year's Academy Bake-Off that didn't earn any VES nominations include "Oblivion", "Thor: The Dark World" and "World War Z".  In contrast, "The Great Gatsby", "Man of Steel", "Mitty", "The Wolf of Wall Street", "White House Down", and "Oz: The Great and Powerful" earned VES nominations while not being invited to the Academy Bake-Off.

Listed below are all of the live-action feature film categories. To see all of the nominees, visit FXGuide's coverage.  To learn more about the Visual Effects Society, visit their web site.

The teaser for Gareth Edwards’ “Godzilla” was given high praise from moviegoers for its beautiful, evocative imagery. The rhythm and pacing of the teaser, combined with the gorgeous visual effects work of a group of paratroopers gliding their way into the ravaged San Francisco skyline, made it one of the most memorable teasers of the year.

Most importantly, the “Godzilla” teaser succeeded because it teased; it didn’t reveal a shred of the film's plot or character, or show audiences exactly what the movie is about, which is refreshing.

One of the reasons the “Godzilla” teaser works so well is the music -- in fact, the first time I watched the trailer, I shouted at my computer screen, “Hey, that’s cheating!” The filmmakers used the music from a sequence in Stanley Kubrick’s “2001: A Space Odyssey”, the famous Jupiter And Beyond The Infinite scene, which features the dazzling slit screen photography, shot by the visual effects legend Douglas Trumbull.

“Any trailer that uses that music would look cool!” I joked. And then, I wondered if that’s really true? Can any trailer with the music from the “2001” stargate sequence look cool?  Challenge accepted!

So I put the Lux Aeterna orchestration from “2001” (by Gyoergy Ligeti) underneath the “Grown Ups 2” trailer, starring Adam Sandler, the least-cool trailer I could think of.  I did some minor picture editing to make the edit work, sweetened the audio and added some stingers.

Now that looks like a terrifying movie. Maybe even more terrifying than the original.