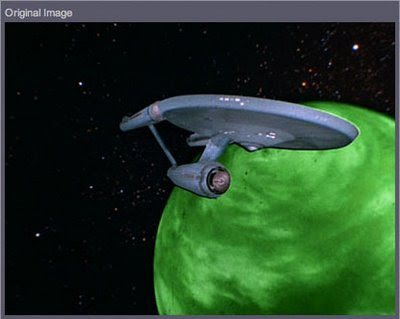 I recently came across a nine-year-old article to which I contributed. Frank Garcia was looking for visual effects professionals' opinions on the idea of creating new visual effects for the original "Star Trek" episodes. The article, from January 2000, was written in the shadow of the Special Editions of the "Star Wars" trilogy and "Close Encounters of the Third Kind," each of which featured newly created visual effects. 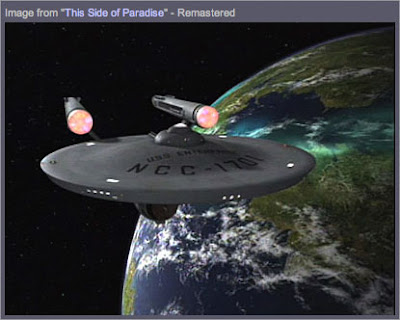 CBS Digital ultimately performed visual effects facelifts to the episodes, and has since released them on video and broadcast. You can learn everything that Paramount wants you to know about the remastered episodes at startrek.com, which features plenty of articles and before-and-after comparisons.

I contributed to the article, "Special Effects Redux," and my comments hold up surprisingly well. I'm always hesitant to read some of my old writing and interviews, (a few of the reviews on VFX HQ still make me cringe) but am happily satisfied that, in this case, I made an ounce of sense. I still am of the opinion that these 'special edition' revisits are ridiculous and purely driven by commercial concerns, rather than artistic merit.
For a discussion on contemporary visual effects and exploring the idea of recreating STAR TREK'S SFX, Fandom asked two visual effects professionals who are working in the business today for their views. First is Todd Vaziri, a noted visual special effects supervisor whose artistry can be seen in DR. DOLITTLE and XENA: WARRIOR PRINCESS. He also writes extensively about the visual SFX business at his website Visual FX Headquarters. After a full briefing of Digital Stream's activities, Vaziri's feelings were mixed, just as they are with STAR WARS' special edition releases, about which he has written previously. 'As a purist, I think it's rather ridiculous,' says Vaziri. 'At a certain point you have to call a piece of art finished. And when they're done, you let it be. And you move on to a new project. You don't continually go back and fix a mistake that you may have made or retread the same ideas you had before. 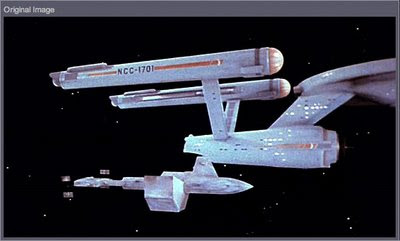 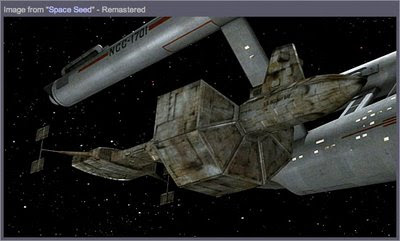 'I'm very much an advocate of preserving the past and looking forward to try and create new classics. Which is the current, most accurate film? Are we going to get special editions with every film every 10 or 20 years? When a film comes out I'm assuming already 'Okay, this is the first pass, the rough draft.' '

On the other hand, Vaziri recognizes the allure of a compelling idea. 'It was such a refreshing change to see in DEEP SPACE NINE's 'Trials and Tribble-ations' the technology and the detail we can get today of the space station and the Enterprise. It was an interesting gimmick. Replacing the SFX of a single episode, that would be kinda cool. You put it on UPN and get great ratings. But to get into it for the entire series or a couple of episodes, is ridiculous.'

Vaziri also has strong feelings from an artists' point of view. 'I think of the people who toiled feverishly over the original STAR WARS, getting the shots and how revolutionary they were. The original SW shots that were replaced, they'll never be seen again!' Although Vaziri recognizes that the original STAR WARS releases will live on with DVDs and videotape, he says, 'The Special Edition is the 'final edition.' 'They made those episodes as well as they could with the money they had,' he says. 'Don't betray their efforts just because, oh, 20 or 30 years have passed and they can do it much better now.'

Asked if it is likely for Hollywood to develop a practice of replacing SFX on other iconic film or TV projects, Vaziri replies that the bottom line is economics. 'It could be profitable,' he says. 'The studio executives have to look and say, 'Are we going to spend to revamp this 30 year old film?' Studios are even reluctant to making new video transfers. They think it's not worth it. I think it will be very sparse.' 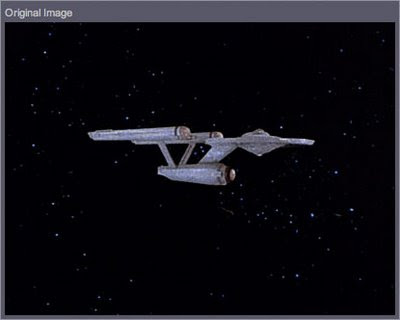 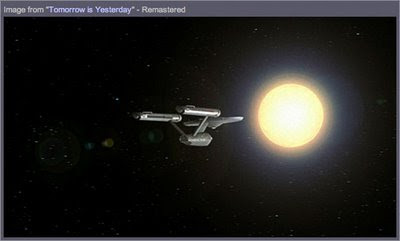 If there are any sins in Hollywood, in the way that visual special effects are produced, says Vaziri, are those projects that are spectacle over substance. 'I'm constantly pushing towards the use of SFX as a portion of the film,' he says. 'Not as a character gimmick or 'Hey! Look at me!' The best films are always about stories and characters. The SFX creates the worlds in which they live. In rare cases, the SFX are the characters, like JURASSIC PARK or THE PHANTOM MENACE where an entire character is being generated as SFX. For the most part, they should never take center stage. They shouldn't draw attention to themselves. The best SFX I've ever done are the ones people haven't noticed because they were so caught up with the film. We did about 50 or 60 visual effects for A STIR OF ECHOES, and there were only two or three that were really 'in your face.' Nobody noticed any of the other SFX. That's a big compliment because the work doesn't draw attention to itself. People don't walk out of the theater saying, 'Wow! Great SFX!' I think invisible is important.'

Contextual usage of SFX as part of the film is also very important, says Vaziri. Sinful 'spectacle over substance' effects films includes THE AVENGERS, LOST IN SPACE and GOZILLA, says Vaziri. In the case of a Digital Stream-created STAR TREK vision, Vaziri also has a problem with the forced comparison between the original and a new edition. 'That's extremely distracting. You're going to see an episode where the sets were so cheaply made that you can see a little gap on the floor and then you cut to this new, perfectly detailed CGI SFX shot? It totally does not fit within the context of the film! It takes you out of the film and draws attention to itself. If new SFX are made for 'The Doomsday Machine,' they're out of place and context. It draws attention to them rather than being a service to the story and characters.'

For quite possibly the first time ever, I wholeheartedly agree with a Fox News anchor. Here's Shepard Smith speakin' the truth, with some salty language, as an added bonus!

Update: Our friend Stephen Colbert had something to say about Smith's antics. 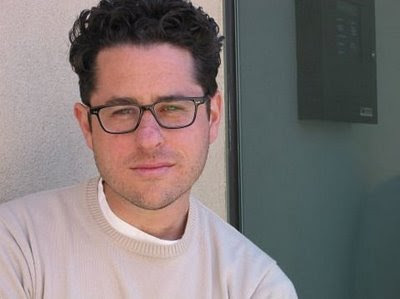 If you only read one article about director J.J. Abrams and his approach to creating a brand new "Star Trek" film, read this one. Here are some choice excerpts:

LATimes: You know that no matter what you do, you'll get an earful from hardcore fans.

Abrams: The key is to appreciate that there are purists and fans of "Star Trek" who are going to be very vocal if they see things that aren't what what they want. But I can't make this movie for readers of Nacelles Monthly who are only concerned with what the ship's engines look like. They're going to find something they hate no matter what I do. And yet, the movie at its core is not only inspired by what has come before, it's deeply true to what's come before. The bottom line is we have different actors playing these parts and from that point on it's literally not what they've seen before. It will be evident when people see this movie that it is true to what Roddenberry created and what those amazing actors did in the 1960s. At the same time, I think, it's going to blow people's minds because its a completely different experience than what they expect.

...it felt to me that the key to "Star Trek" was to go from the inside-out: Be as true to the characters as possible, be as real and as emotional and as exciting as possible and not be distracted by the specter of all that the "Star Wars" film accomplished.