"Transformers 2" and the Tomatometer 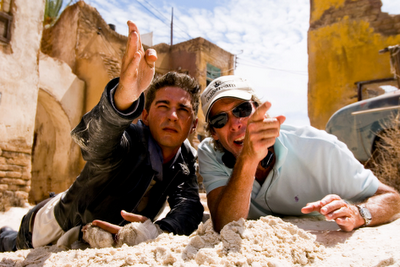 Happy end-of-2009! 2009 will be remembered as the year we saw "Transformers: Revenge of the Fallen" earn $402 million at the North American box office (and $834 million globally)!

Putting those $402 million into context: "Transformers 2" was the highest grossing film of the year! And it wasn't even close! The #2 grosser was "Harry Potter and the Half-Blood Prince," with over $100 million less in earnings!

I thought it would be fun to chart the box office champions of the last 29 years against their Tomatometer rating, an aggregate of the critical consensus of the film! So I did it! And, boy, it was fun! 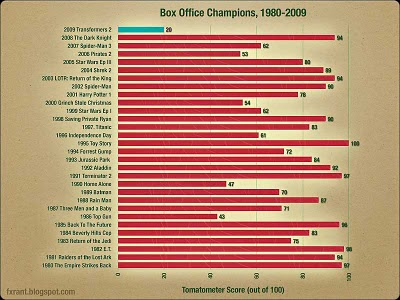 (Why all the exclamation points, you ask? Obviously, this post was meant to be a reflection of the spirit of "Transformers 2," which is the cinematic equivalent of an exclamation point!)
Posted by Todd at 12/21/2009 04:17:00 PM 3 comments: 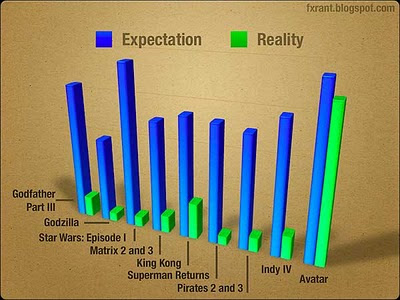 The Cinematography of "Let The Right One In," Part 2

In Part 1, we looked at cinematographer Hoyte van Hoytema's geometric motifs in "Let The Right One In." In this post, we look at some simply cool images from the film. 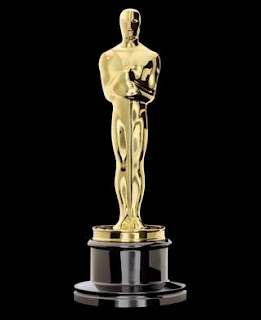 The visual effects branch of the Academy have announced their 'list of 15' films, considered semifinalists in the race for the Oscar nominations for the 82nd Academy Awards, as determined by the branch's Executive Committee:
The visual effects branch's Executive Committee will then whittle this list down to seven films in the next few weeks, which will be featured at the bake-off (to take place on January 21, 2010) where each of the seven films presents a 15 minute reel of their finished work, and takes questions from the entire visual effects branch. The entire branch then votes for their top three choices, which ultimately determine the three Academy Award nominees for Best Visual Effects. The nominees for all categories will be announced on February 2, 2010. The entire Academy membership then votes on the winner.

I'm very proud to have contributed to the visual effects for three films on this list: "Star Trek," "Avatar" and "Transformers: Revenge of the Fallen," while at Industrial Light & Magic.