The Aspect Ratios and Cinematographers of Steven Spielberg 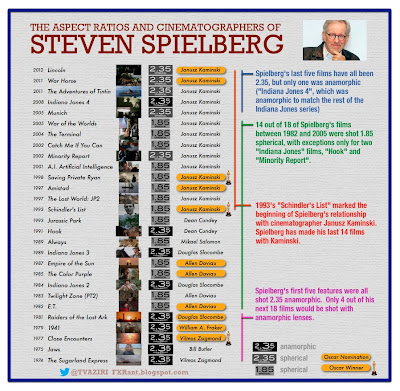 Here is one of my many half-finished FXRant articles and graphics. I decided to just tidy it up and post it because, well, why not.  Plus, I wanted to publish it before Spielberg's next film was released.

I don't really have any grand, cogent conclusions to share, I just really wanted to visualize the aspect ratios, lens and film formats and cinematographers used by filmmaker Steven Spielberg over his 39 year film career. I've also indicated Oscar nominations and wins for cinematography on the graphic.