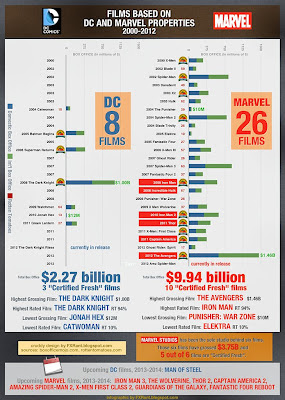 With the recent news that Warner Bros. and DC Comics are looking for a director for "Justice League", I thought it might be an interesting exercise to take a look at the feature films based on the two biggest comic book companies’ properties.

Growing up, I didn’t read comics; I watched movies and tv.  In fact, I probably have only read one entire comic book in my life.  My exposure to comic book superheroes was entirely based on their films and television shows.  One of my favorite movies as a child was “Superman” (1978), I loved the Adam West “Batman” series, and even was a fan of the awesome CBS “Spider-Man” series.  I didn’t know the difference between Marvel heroes or DC heroes.

I only became aware of the two titans’ personalities in the 1990’s, when comic book movies exploded after Tim Burton’s “Batman” became the first in a new line of comic book-based blockbusters.  Comic book films are attractive to risk-averse studios due to characters’ built-in audience awareness and apparent ability to reboot and reinvent themselves every few years.

Since 2000, Marvel has been especially aggressive in Hollywood, making twenty-six films based on their properties.  Marvel maintains partnerships with various studios (Sony produces Spider-Man films, Fox produces X-Men films, for example), but also began independently producing their own movies with Jon Favreau’s “Iron Man” in 2008.  Marvel Studios’ track record has been phenomenal; the Marvel brand has become synonymous with quality superhero flicks.  The culmination of Marvel Studios’ hard work in establishing its brand is Joss Whedon’s “The Avengers”, a universally loved film that has grossed almost $1.5 billion at the box office.

It’s clear that DC and Warner Bros. (DC’s parent) are sitting on a gold mine; they just can’t seem to get their act together.  Well-known properties like Wonder Woman, Aquaman (“Entourage” did it, I know) and The Flash just sit on the shelf, ripe for the picking.  DC needs to follow the simple formula perfected by Marvel: hire quality filmmakers (Whedon, Favreau, Kenneth Branagh) and actors (Robert Downey Jr., Mark Ruffallo, Samuel L. Jackson, Scarlett Johanssen) to make consistent crowd-pleasing films that aren’t monumentally stupid.

The only time DC has been close to mimicking this formula is with its magnificent handling of the Batman films; hiring the brilliant Christopher Nolan to run the franchise was a stroke of genius, which brought along the amazing acting talents of Christian Bale, Michael Caine, Gary Oldman, Anne Hathaway, and Heath Ledger.  Nolan’s trilogy is complete, and DC and Warner Bros. will probably reboot Batman by 2015 with, oh, let’s say, McG directing.

DC has essentially struck out on all of their other attempts, failing miserably by the shoddy, forgettable productions of “Catwoman”, “Jonah Hex” and “Green Lantern”.