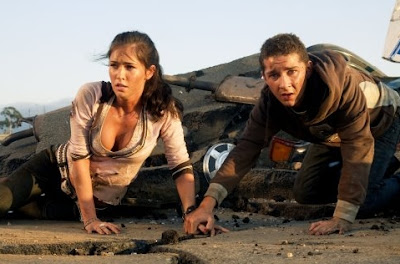 Megan Fox, one of the actors from "Transformers," on acting in the film:

"You know, you sit and you think, 'This isn't realistic and people are going to hate this and I feel like a f--king douchebag and I can't do it,'" laughs Fox. "But then you think nobody's even going to give a s--t. There's going to be so much happening around this that they have to tie you into the story somehow, because there are a lot of people who would just watch a movie that was nothing but robots fight[ing]. Sure, but the majority of people… I heard Shia say they want to see some sort of human interaction, human involvement, so those things have to, I think unfortunately they have to be thrown in there. And we're trying to steer away from -- we know the fans and they don't want any sappy bulls--t. We're trying to stay away from that and keep it as realistic as possible and as much about the Autobots and Decepticons as we can."

but she looks hot right?

please tell me the dailies were not as horrible as she makes them to be :)