Hell Has Frozen Over 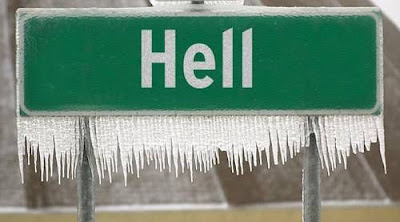 After years of relentless begging and pleading from people who know what they're talking about, the visual effects branch of the Academy of Motion Picture Arts and Sciences has finally, finally approved the expansion of the number of nominees for the Academy Awards from three to five films.

With the overall quality of feature film visual effects achieving new heights over the past 20 years, this decision, while awesome, comes much too late. Far too many films that deserved visual effects nominations were left nomination-less because of the branch's bizarre devotion for three nomination slots.

The visual effects branch's decision needs to be approved by the Rules Committee and Board of Governors. Hopefully, this will mean that the 83rd Academy Awards will feature five nominees for Best Visual Effects. Finally.

And what will this mean to The VFX Predictinator, our totally awesome formula that accurately predicted the visual effects Oscar winner across 21 years? It will require a serious overhaul, since many of the formulas are dependent on the assumption of three nominees. More likely than not, we'll have to come up with an all-new formula.
Posted by Todd at 5/19/2010 10:00:00 AM

It's about time. Actually, it's well past time as you mentioned.

Maybe now movies like G-Force and the Chipmunks movies will get a well-deserved spot?

Yeah, now there is room for all the Transformer sequels!

I personally find this to be pretty good news.

I agree with shanep. "Transformers 2" may not have been the best movie (I still loved it), but it's much too obvious that it deserved a spot in the nominees for last year-even if it didn't win. The visual effects may have been considered "same old, same old", but the quality and artistry presented is spectacular nonetheless and deserved a spot. And "Transformers 3" should definitely get a spot for 2011 films (and hopefully the award). :)

And many other films deserve to be in the nominee-list spots as well. Taking previous years for example: "Jurassic Park III" in 2001, and "Harry Potter 4" and "Revenge of the Sith" come to mind for 2005 films, in particular. But, it's not like they're going to re-do previous years' awards for this, so I guess it doesn't matter. :)

(And maybe this will diminish ILM's 'drought' of Academy *Awards*. Go ILM!)

I hope this change takes effect in time for the 83rd Oscars. Interesting to see what films will go up against "Iron Man 2" and "Tron Legacy" for the award. ;)

I think the two extra slots are going to be filled with computer animated movies.

And does this mean no more Bake-Off?

Or will they include more movies for the final Bake-Off?

I doubt that the two extra slots will be filled with computer-animated films. This category is still for "live-action visual effects", whilst the computer-animated films will still remain in their "Animated Film" category. I wouldn't be too happy if films like "Shrek Forever After" and "Toy Story 3" were in the same category as "Iron Man 2" and "Tron Legacy" and whatnot, because they are too completely different mediums and on two separate playing fields. To me, the animated films do not technically belong in the "visual effects" category.

But then again, that's just my thoughts, and I could very well be wrong.

I don't know what this means for the Bake-Off. Hopefully nothing too drastic. Maybe just more variety or spots or something?

vfx fan said...
This comment has been removed by the author.
8:47 PM

Hi, I think it’s a great think to have more recognition for the people who work hard at putting in these amazing effects that we have in the movies.

I don’t think having extra categories for VFX will affect the rest of the Oscars or The Best Picture category. These days high end VFX are making a significant mark on the movie industry. P

eople are willing to go to the theater again, because they want to enjoy the full movie going experience. The proper uses of 3D and really well done effects are what a lot of people are going to the movies to see.

Most films were downloaded or rented in the last couple of years and that was affecting the box office ticket sales of all movies. Now, people want to enjoy the whole movie experience in 3D on an Imax screen and that is bringing people back to the theater. Please check out my VFX/SFX blog at