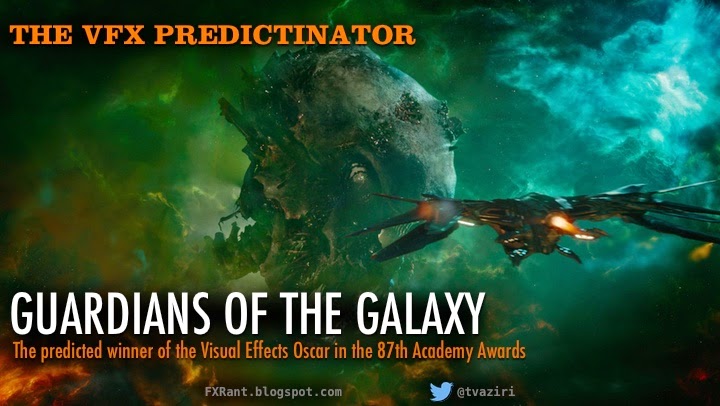 Let's see what the formula says about the 87th Academy Award nominees for Achievement in Visual Effects.

You read that correctly. The VFX Predictinator predicts “Guardians of the Galaxy” to win the Academy Award for visual effects. To say we were surprised would be an understatement.

“Guardians” certainly earned its VFX Oscar nomination, and is a worthy contender.  But leading up to the bake-off, the conventional wisdom thought the VFX Oscar race was between the exceptional work of "Dawn of the Planet of the Apes" and "Interstellar". "Apes 2" advanced upon its predecessor with even more convincing apes made entirely with computer graphics (driven by motion capture and keyframe animation) featured in beautiful effects shots with nuanced and clever shot design. "Interstellar" and its director Christopher Nolan pushed visual storytelling boundaries by insisting on as much practical, real-world techniques as possible. Intense, gorgeous visual design infused the film's wormhole, black hole and tesseract sequences with bold, innovative energy.

Both films were big hits, both films were critically acclaimed ("Apes 2" was more of a crowd-pleaser, while "Interstellar" earned praise for its audaciousness and scorn for its, well, Nolan-ness.)

Personally, I thought “Interstellar” had a slight edge in the race. “Gravity”, like “Interstellar”, also featured large-scale, impressive space visual effects. Like “Gravity” (which was up against big superhero, sci-fi and fantasy blockbusters), “Interstellar” is arguably the most ‘important’, least spectacle-based, thought-provoking film of the nominees, and the film most likely to garner additional Academy Award nominations. “Interstellar” is a vote that would make Academy voters feel ‘good’. It’s the classy choice, versus choosing comic book films or sequels.

Of the ten films nominated for VFX over the last two years, the only films that are not based on other material are “Gravity” and “Interstellar”. Finally, “Interstellar”’s ace-in-the-hole is Matthew McConaughey; a key Predictinator data point is ‘Actor Prestige’, which rewards a film an entire point if its lead actor has won an acting Academy Award. (McConaughey won last year’s Best Actor trophy for “Dallas Buyer’s Club”.) Remember, “Gravity” starred Sandra Bullock, who won an Oscar for “The Blind Side” which earned the film a valuable Predictinator point. 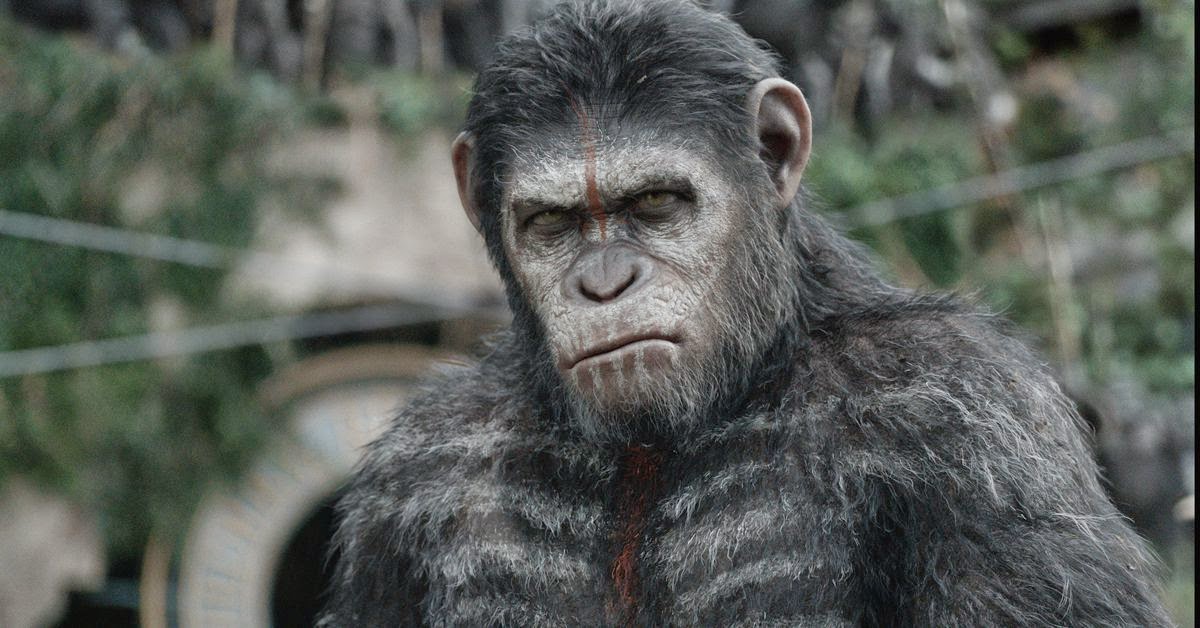 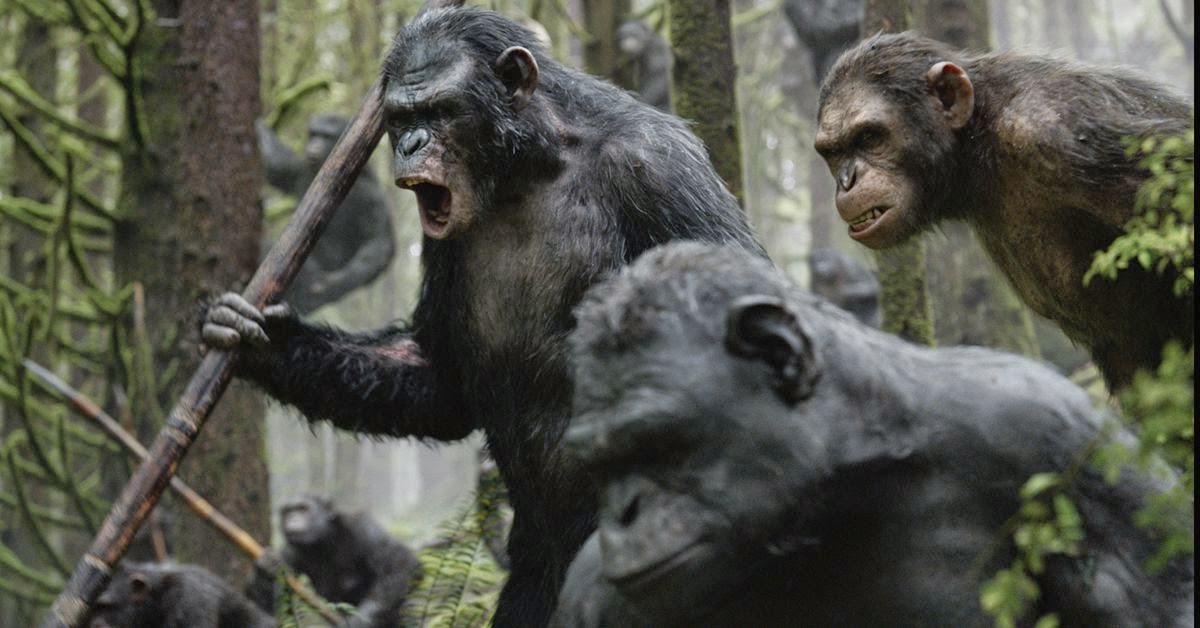 The digital character work in “Apes 2” was beyond magnificent. The filmmakers made a sequel that was even more warmly received than its crowd-pleasing predecessor, and the visual effects work kept pace by adding more characters, more environments, with the apes delivering even more dramatic performances. Even though “Apes 2” would win Predictinator points for organic creatures and facial acting work, it would get dinged for its earlier release date, and for being a sequel.

For weeks, I thought it would be between these two films, and until I could run The Predictinator numbers, I was sweating, since I didn’t know which film the formula would pick. This is why my pre-Predictinator anxiety was so high. 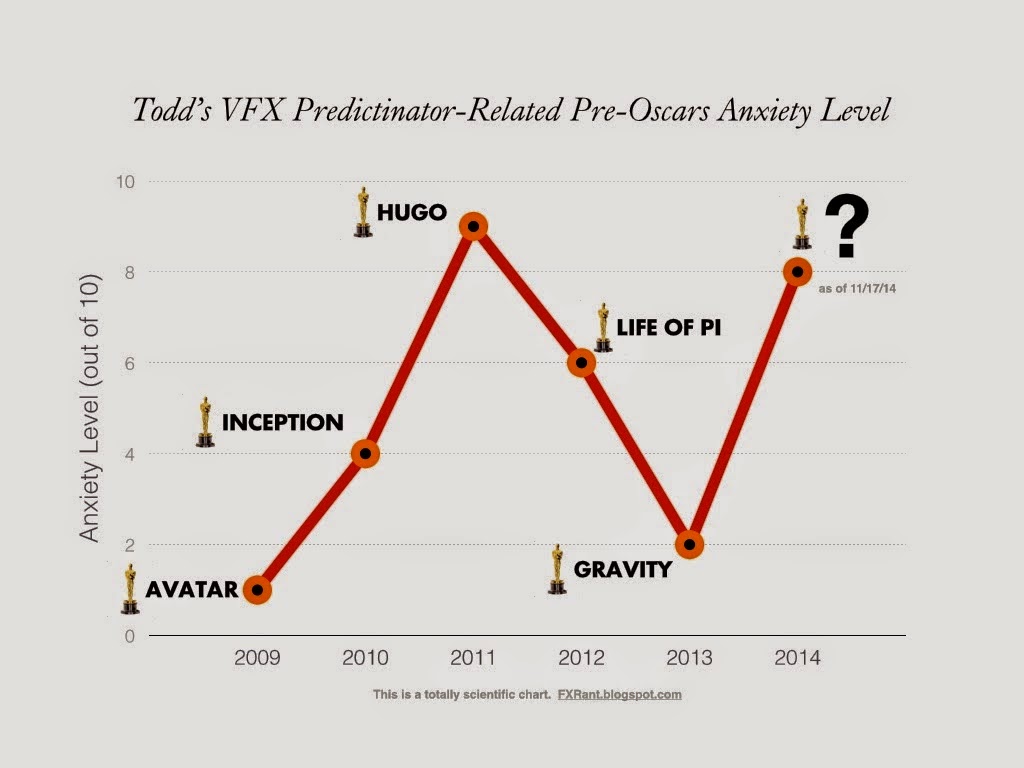 If only I knew what was about to happen.
From November 2014, before even the bake-off films were announced

So, if the race was really between “Interstellar” and “Apes 2”, why the heck did the The VFX Predictinator choose "Guardians of the Galaxy"?

When running the numbers each year for The Predictinator, my wife and I have our little ritual. I prep all the data (box office tallies, months of release, etc.), and she preps the Excel spreadsheet that contains the formula. I read off each film's data points-- she plugs them into the spreadsheet. She sees each film's score updated in real time, but doesn't give me any hint of the updating point values.

We enter the data for each film in alphabetical order: first "Captain America 2", then "Apes 2", then "Guardians". I noticed after I read through "Guardians" data points, she grunted quietly. I immediately began to sweat. We continued with the data points, without any commentary. "Interstellar" and "X-Men: DOFP" finished up our list. The predicted winner was revealed on her screen.

“We've got a problem here,” she said.


“Guardians of the Galaxy” was staring us in the face, winning with 6.18 points. It’s not a runaway leader; “Interstellar” is close behind at 5.43 points, and “Apes 2” is at 5.23 points. So at least we were right to think that “Interstellar” and “Apes 2” would be evenly matched.

In terms of Predictinator scores, this year’s race is the closest since 2007, when “The Golden Compass” (4.98 points) beat “Transformers (4.91 points).

In fact, to illustrate how competitive the five films were, the stunning “Interstellar” was the least critically acclaimed film of the five VFX nominees with an extremely respectable 72% on the Tomatometer; the other four nominees scored at least 89% on the Tomatometer. At the box office, it earned an also respectable $189M, but it was the lowest grossing film amongst the five VFX nominees.

Making matters worse for “Interstellar”, the Predictinator treats box office and critical acclaim as relative to one another. So even though its box office and Tomatometer rating were quite respectable, the forumula heavily penalized the film for being the outlier in both categories.

What gave “Guardians of the Galaxy” the advantage this year? The film faired well in several pieces of criteria:


Confused and frightened, my wife and I walked around the house like zombies. We were stunned by this upset. Dejected, she finally said, “Well, I guess this time The Predictinator will be wrong.”

THE PREDICTINATOR WILL BE WRONG AND THIS MAKES US SAD
My wife and I always wondered when our little formula turn up with the wrong VFX Oscar winner. We are very proud that the numbers correctly predicted “Avatar”, “Inception”, “Hugo”, “Life of Pi” and "Gravity”. (“Hugo”! No one was predicting “Hugo”!)

For a brief moment, we thought about creating an all-new formula - one that tinkers with the percentages, or adding a new criteria that helps ‘correct’ for what appears to be an unlikely winner.

For example, historically, we know the Academy virtually ignores the entire comedy genre, for whatever reason. Academy voters seemingly want their vote to be ‘classy and important’, rather than rewarding films that simply made them laugh.

The rare honor of an Oscar for a funny film comes infrequently; Kevin Kline won the Oscar for Best Supporting Actor back in 1988 for “A Fish Called Wanda”. And comedic films are rarely represented among the VFX Oscar nominees. However, any points we remove from “Guardians” for being a comedy would also negatively affect the Oscar win for 1992’s “Death Becomes Her”, which was one of the most difficult films in which we had to ‘make’ win, using our formula. The formula change that would help us in 2014 would hurt us in 1992.

(In fact, since 1989, the only VFX Oscar nominees that can remotely be deemed a comedy are “Guardians”, “The Adventures of Baron Munchausen” and “Death Becomes Her”.)

But completely revamping the formula to avoid incorrectly predicting this year’s winner seems obtuse and unsportsmanlike. The endeavor would turn into a math problem rather than a philosophy. We gave it our best shot, and revisiting it each year seems like cheating. If we do, in fact, predict incorrectly this year, perhaps it indicates some sort of paradigm shift in Academy voting for which we are not accounting. But we will cross that bridge when we come to it.

THE PREDICTINATOR IS RIGHT - “GUARDIANS” WILL WIN THE VFX OSCAR
“Guardians of the Galaxy” is a crowd-pleasing super blockbuster that critics adored. It was the #1 movie at the U.S. box office by a longshot (the #2 film was $73M away), and it earned $773M worldwide. Its worldwide gross was only behind “Transformers 4” and “Hobbit 3”. Its Tomatometer score was an astonishing 91%.

“Guardians” was, by most Hollywood measures, a genuine risk taken by Marvel Studios. The film is a sci-fi comedy with relatively unknown, non-mainstream characters. It was Marvel’s first film to take place almost entirely off the Earth, featuring a talking raccoon and a talking tree as prominent characters. And, it was the savior of Hollywood’s summer; released in August, Hollywood exhaled after an extremely modest summer at the box office, relieved that James Gunn’s movie became a monster hit. Hollywood might want to reward “Guardians of the Galaxy” in a big way; by giving it a visual effects Oscar.

Most paramount, “Guardians” had two prominent characters in an ensemble cast that were entirely computer generated creatures. Rocket Raccoon (voiced by Bradley Cooper) was realized by Framestore as a wacky, genetically modified talking raccoon. Rocket cracked jokes, hurled insults, piloted spaceships, right alongside his human castmates. Groot (voiced by Vin Diesel) is a walking tree with arms, legs and a face. Like Rocket, Groot (realized by MPC) interacted fully with the people around him. These are two completely synthetic characters sinking into the narrative. Audiences were completely convinced by the authenticity of these beings. The synthetic nature of their existences were not questioned.  Just like the brilliant creatures in Oscar winning films like “Life of Pi”, “Avatar”, “Pirates 2”, “King Kong” and “The Two Towers”, “Guardians” will take the Oscar because of its ability to create fully realized synthetic creatures that help tell the story.

Many might argue that “Apes 2” and “Interstellar” are much more significant films when it comes to the technical and creative innovation that the Academy typically wishes to reward. “Guardians”, however, is similar to 1996’s “Independence Day”, a film whose visual effects were extremely well executed but not necessarily groundbreaking or exceptional. That same year, “Dragonheart” and “Twister”, arguably were far more advanced and risky projects. In addition, back in 2000, “Gladiator” (a crowd-pleasing, critically-lauded film with beautiful matte painting environments and set extensions) defeated two films that were much riskier and forward-thinking, “The Perfect Storm” and “Hollow Man”.

Groot and Rocket Raccoon were animated and rendered so well that audiences completely accepted them as living, breathing characters right alongside Peter Quill (Chris Pratt), Gamora (Zoe Saldana) and Drax (Dave Bautista). And the Academy will want to reward the film for achieving this amazing accomplishment.

We will see what happens when the Academy Award winners are announced on February 22.

Fascinating read as always Todd. This race just got even more exciting.

Curious that if you include 10 contenders rather than final nominated 5; would winners from previous years be bumped out by another unlikely film. If so maybe try adding another variable to formula such as if director is popular with previous vfx winning films they've done.

When I ran the formula before you posted this article, I found the formula (as originally posted) predicted Interstellar. Looking at your values, I need to apply a 5/3 multiple to all renormalized terms. Is this an additional term that appeared when the number of nominees went from 3 to 5?

We covered the conversion of the formula from 3->5 nominees in this post.

My wife is in charge of the actual formula spreadsheet itself. Yes, we had to tweak the relative normalizers to make the formula authentic to the full set of nominees.

This is awesome ! Congratulations on your work.