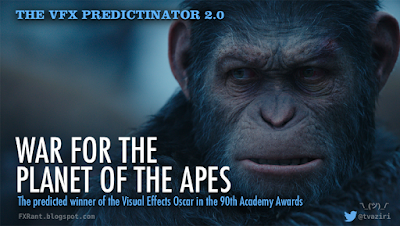 What is The VFX Predictinator? Start here.

Even though The Predictinator failed at predicting "Ex Machina" two years ago (probably because we're now in a post-digital era and our assumptions are no longer rock solid), the formula bounced back last year, correctly predicting "The Jungle Book" to win the visual effects Oscar.

We ran the numbers for The VFX Predictinator with the nominees for Best Visual Effects for the 90th Academy Awards, based on data for January 13, 2018. Here are the results, as promised, but without our typical annual, long-winded accompanying article.

APES ON TOP
The Predictinator chose "War for the Planet of the Apes" to win the visual effects Oscar, based on the classic criteria of having strong critical acclaim and the film's prominent organic character animation. It's a solid choice, and a gut-check confirms this.

THE SPOILER?
Following close behind is "Blade Runner 2049", which could upset "Apes", since it is, arguably the most 'artsy' and 'classy' choice for Academy voters. In fact, in a post-digital world, the most classy choice has been winning the visual effects Oscar more frequently ("Ex Machina", "Life of Pi" and "Gravity", for example).

AND THE REST
In third is "The Last Jedi", which earned points for its huge box office, but suffers from being a sequel. Rounding out the list are "Kong: Skull Island" and "Guardians 2", which are strong hits but will probably not resonate with Academy voters.

Basically, my fundamental position hasn't changed: we are now in a post-digital era. Exceptional visual effects are expected by audiences (and the Academy) in all films.

We’ll see what happens when the 90th Academy Awards take place on March 4, 2018.

update, 1/1/2019: This effort represents the last time we will run The VFX Predictinator. There are two main reasons why we are retiring the formula and this effort. One, that we are clearly living in a post-digital era; the world has changed, and the newness of digital characters is no longer shiny and exciting, which means the assumptions are no longer accurate. I wrote extensively about the post-digital era here. And two.