Comically Out of Touch

Before you read the following transcript, remember this: George W. Bush received a bachelor's Degree from Yale University, got a Masters from Harvard University in business, and was the Chairman and CEO of the oil company, Arbusto Oil. Oh, and he's currently the President of the United States, a nation which is going through a severe economic downturn.

From the President's press conference on February 28, 2008:

Q: What's your advice to the average American who is hurting now, facing the prospect of $4 a gallon gasoline, a lot of people facing --

THE PRESIDENT: Wait, what did you just say? You're predicting $4 a gallon gasoline?

Q: A number of analysts are predicting --
THE PRESIDENT: Oh, yeah?

Q: -- $4 a gallon gasoline this spring when they reformulate.

THE PRESIDENT: That's interesting. I hadn't heard that.

THE PRESIDENT: Yes. I know it's high now.

Q: And the other economic problems facing people. Beyond your concern that you stated here, and your expectations for these stimulus checks, what kind of hope can you offer to people who are in dire straits?

THE PRESIDENT: Permanent tax -- keep the tax cuts permanent, for starters. There's a lot of economic uncertainty. You just said that. You just said the price of gasoline may be up to $4 a gallon -- or some expert told you that -- and that creates a lot of uncertainty if you're out there wondering whether or not -- you know, what your life is going to be like and you're looking at $4 a gallon, that's uncertain.

Q: Any restrictions on who can give [to your presidential library]? Will you take foreign money for this?

THE PRESIDENT: Yes, I'll probably take some foreign money, but don't know yet, Ken. We just haven't -- we just announced the deal and I, frankly, have been focused elsewhere, like on gasoline prices and, you know, my trip to Africa, and haven't seen the fundraising strategy yet. So the answer to your question, really, I can't answer your question well.


Well, there you go. The Harvard and Yale-educated oil man who launched an unprovoked war in the oil-rich Middle East didn't know that gasoline was about to hit $4 a gallon in his own country. 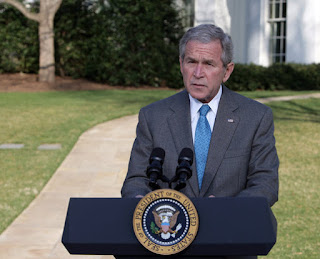 In addition, this is a brilliant illustration of how a person who frequently and casually lies gets caught in a lie by the telling the truth only moments before. Examine these two statements:

"I hadn't heard that." This is, most likely, the truth. I believe it.

"I, frankly, have been focused elsewhere, like on gasoline prices." This is, of course, a lie.

Those two statements, uttered within moments of one another, illustrate the President's mindset. Exclusively, they do not inform us of his actual beliefs. The only reason we know why one statement is a lie and the other is the truth is because of their proximity and obvious paradoxical nature. Had he not told the truth ("I am woefully unaware of what is going on with gas prices.") he wouldn't have been exposed with his silly, pandering, unnecessary lie ("I'm working hard on things like gas prices.").

Funny, when converting the prices over here (Netherlands) to US dollar per gallon, we seem to be paying $9.92 per gallon (about 1.59 euro per liter).
Still, it's time the whole world starting takign rehab for its gazoline addiction.

Oh, and before i sound like a troll just answering for this article, i've been following your blog for quite some time (I miss VFXHQ by the way), and really like what you do.