"Avatar," "Transformers 2" and the Tomatometer 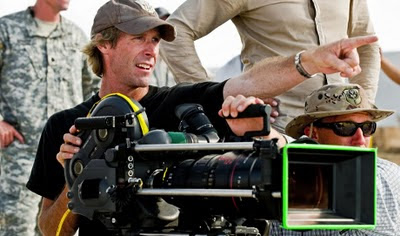 photo credit: michaelbay.com
We can all breathe a sigh of relief. 2009 will not go down in history as the year a "grinding garbage disposal of a movie" earns the top spot at the box office. The film once described as "a horrible experience of unbearable length" has been overtaken by James Cameron's "Avatar" as the highest grossing film released in 2009. No longer will there be a risk of a "a wad of chaos puked onto the big screen, an arbitrary collection of explosions and machismo posturing and frat boy assholery" permanently marking its spot at the yearly box office charts.

I have updated my previously posted chart, comparing the box office champs of the last 29 years, to include "Avatar." I kept "Transformers: Revenge of the Fallen" on the chart for comparative (and comedic) purposes. 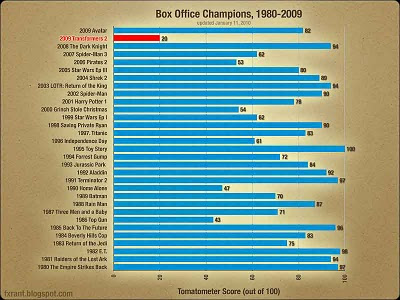 I honestly didn't understand all the hate for "Transformers 2." It's as if critics (who are becoming increasingly delusional with each new movie) were expecting a deep exploration of the human condition (although the shallowness of the human characters matched up to the reality surprisingly accurately).

Personally, I was expecting a summer blockbuster sequel -- bigger, louder, and meaner -- and no sequel met my expectations more than "Transformers 2."

I agree with the above Anonymous. I understand that "Transformers 2" wasn't the best movie, but I hardly think that it's as bad as critics make it out to be. (Maybe only half as bad, which is still bad...) Yes the script was rushed, the pacing poor, and the humour racy, but I think that 19% is a bit rough.

I was expecting giant robots and action that improved upon the first film, and that's what Bay and ILM delivered. (Nice one, Todd.) My two complaints were the pacing and childish humour. The childish humour could've easily been done away with, but the pacing would've needed a bit more tweaking.

And yes, I thought "Avatar" was excellent. As visually awesome as "Transformers 2", but not so childish.

They are both one of my favourite movies, but I just don't beleive that "Transformers 2" deserves a 19% on Rotten Tomatoes. Heck, I'd be fine if it was bumped up to 35%. :D

But, this is just my opinion.

Transformers 2 was awfull, hard to watch and I longed for it to be over. Avatar matched this awfullness with it's cliche, poor dialogue and terrible design work. Sure the fx are good in both but the dissparity in critical reception baffles me.

Are you allowed to be so critical of a film ILM worked on Todd? Won't this affect your perception there, or have you moved to another studio now?

Anonymous #52,425 wrote
>Are you allowed to be so critical of a film ILM worked on Todd? Won't this affect your perception there, or have you moved to another studio now?

This might come as a surprise to you, but ILM is not a totalitarian police state. I have not been whisked away to an undisclosed location and been Jack Bauer'd until I promised never to cut and paste critics' opinions on the films that ILM happens to work on. So, yes, I am allowed to have a point of view.

Here's how this whole funny business works: filmmakers bring their movies to ILM, and with their collaboration we deliver amazing, ground-breaking, award-winning, better-than-they-could-have-possibly imagined visual effects work, and the movie makes lots and lots and lots of money. The system works.

As good as the vfx of Transformers 2 was, the finale felt anti-climactic to me.
I don't know if it felt rushed or what.

I do agree with you, Shanep. The ending was rushed, but I heard that it was due to budgetary reasons, and that's why it felt rushed. (If I recall, Bay stated that even the visual effects were rushed in the end [which is NO insult to ILM or Todd, seeing as how they were doing a lot of tremendous work]).

After spending 30 minutes looking for the Matrix of Leadership, they had a final battle with The Fallen that lasted 2 minutes. The battle could've been increased even by another minute or two, while searching for the Matrix trimmed down. Oh well, it looked cool. But inmagine how much cooler it would've been if it were longer and the film wasn't rushed! Oh, how awesome it could've been. :)

And also, Todd: Your description of ILM makes me want to work there even more. ... Seriously.

In conclusion, "Transformers 2" had some amazing, excellent-ly executed visual effects that deserve nominations and awards and stuff. :)

I'm not talking about the vfx so much as the ending itself. Just the way the film was structured.