Here's the press release sent out by the Visual Effects Society, announcing their nominees for the 8th Annual VES Awards.

"Avatar" earned 11 nominations (from 8 live-action feature film categories). Other multiple nominees include "2012" and "District 9" with 3 nominations each, and "Star Trek," "Terminator: Salvation" and "Sherlock Holmes" grabbing 2 nominations each.

What follows is an edited list of nominees, listing live-action feature film categories only. 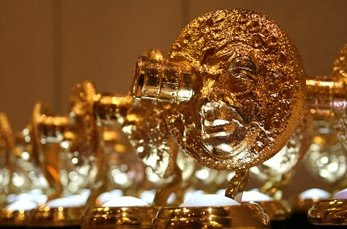 “The Visual Effects Society is proud to present these nominations as the most outstanding work in the field this year,” said Jeffrey A. Okun, Chair of the Visual Effects Society. “It’s important to keep in mind that it wasn’t machines that created these images but incredibly talented artists. We congratulate them all and look forward to seeing who is chosen as the best of the best at the awards show in February.”

As previously announced, this year James Cameron will be honored with the VES Lifetime Achievement Award and Dr. Ed Catmull with the Georges Méliès Award for pioneering.

The nominees for the 8th Annual VES Awards for live-action feature film categories are the following (click here for full list):


For more information on the VES Awards, sponsorship and tickets, please visit www.visualeffectssociety.com.
Posted by Todd at 1/19/2010 02:38:00 PM

Wow. Congratulations to “Avatar”, of course. And Todd, too. I saw your name in there! :D

Now, time for my concerns (and please don’t rage at me!): Is it really fair to have a film nominated in a single category more than once? I mean, even if it IS “Avatar”, I don’t believe that’s fair. I know that “Avatar” has several great scenes, but seriously, give some other films a chance too!)

“Best Single Visual Effect of the Year”: I think that “Transformers 2” should be in here, either for the ‘Forest Battle Sequence’, or the ‘Devastator Character/Sequence’ instead of a second “Avatar” spot. (“Avatar” should win, in my opinion, for ‘Quaritch’s Escape’.)

I wasn’t a fan of “Knowing” as a film, but I will admit that the ‘plane crash sequence’ was very well done. However, I personally think that “Star Trek” also deserves a spot in this category along with “Transformers 2”.

“Outstanding Animated Character in a Feature Motion Picture”: I think that Jetfire from “Transformers 2” should be nominated in this category. His persona, physical appearance and voice actor all helped to sell the realism of this 50 foot character. I loved him in the movie, and thought that the animators did a marvelous job giving him flare and style. (“Avatar” should win, in my opinion.)

“Outstanding Created Environment in a Feature Motion Picture”: “Avatar” has 3/4 of the nominations. Gee, why didn’t they just give the fourth spot to "Avatar" too and save the trouble of voting? (I’m both joking AND being serious. That’s just not reasonable.) This is one of the categories that “2012” deserves to be in. Although, I also think that “Transformers 2” should have a spot in this category for the “Nemesis Ship Sequence” environment, and “Star Trek” for its multiple space environments. (“Avatar” should win, in my opinion.)

Question: Where is the “Best Special Effects (in Service to Visual Effects) in a Feature Motion Picture” category? It was there the last couple of years. This seems like a big category to be missing. In my mind, this is another category in which “Transformers 2” should’ve been nominated (and awarded).

Keep up the great articles, Todd!

vfx fan said...
This comment has been removed by the author.
6:00 PM

vfx fan said...
This comment has been removed by the author.
6:02 PM

Sorry for multiple deletions, but I thought some of my thoughts were inadequately expressed. Anyway:

I felt "Star Trek" should've gotten more than just two nominations, but at least it was recognized.

Also glad that Dr. Manhattan got a nomination; I thought he was the second best blue CG character of the year.

And it's good that the vfx committee doesn't exclude "Transformers 2" from a nomination because of the quality of the overall film.

And not to steal the heat from "Avatar," but I think "Knowing" should get the award for Best Single Visual Effect. I was really impressed with that shot.

And, of course, congrats on your nomination.

Oh yeah, and I'm also thankful that "New Moon" didn't get any nominations. Now I won't be compelled to see the movie.

But still, you gotta respect a man like Phil Tippett.

Holding out for District 9 because I am a South Africa but I am sure Avatar will do the best.

Except Best Single Visual Effect of the Year: KNOWING - Plane Crash
just something about it made it so convincing, even my Wife told me afterwards that it looked so real.

hello, my first comment here. i think avatar is an outstanding achievment in the visual effects department and it deserves all the praises and the awards is getting. the best parts of the work are , in my opinion, the enviroments, the vistas, the jungle: all these things look photorealistic. also the veichles, the mech and all the pandora animals are very well rendered. my only problem with the vfx are the main carchters: the na'vi. they are very well done cg carchters, the performance caputre works quite well most of the time, but the na'vi( expecially jake avatar, grace avatar and all the clan memebers. neytiri looks more real, imho ) dosen't look like living and breathing creatures. i think they are a step back in terms of photorealism compared to davy jones, king kong or even the aliens from district 9. please, i don't want dismiss the work of anyone, it's only my personal take on the effects and the CGI of the movie. thanks.

Wow I didn't know Avatar earned 11 nominations it should be because its cast is perfect and producers had the great imagination probably they have visited many times viagra online in order to create something like that.